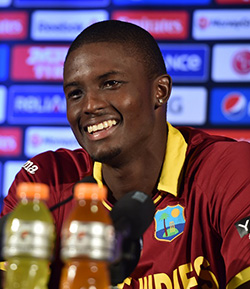 BRIDGETOWN, Barbados: West Indies captain Jason Holder does not foresee any decrease in intensity from his side when they take on minnows Zimbabwe in two Tests in Bulawayo later this month.
The Caribbean side left the island on Monday for the short rubber, which will see them chasing their first series since they beat Bangladesh in a similar two-Test series in the Caribbean three years ago.
Holder said the trajectory of the Windies performances was headed in the right direction and Zimbabwe presented an ideal opportunity to continue that progression.
“It won’t be difficult to motivate the guys,” Holder told CMC Sports prior to the side’s departure.
“We’re a young side. After the performances we’ve had in England and earlier in the year against Pakistan and also in the back end of last year against Pakistan again, I think is encouraging and we have to keep heading in the direction we’re going in.”
He continued: “I am seeing really good things from this group and I don’t think there should be any difficulty in motivating any of the guys. Everybody should be up for it. It’s our chance to win a series. We haven’t won a series in a while and Zimbabwe will be a good opposition for us to play.”
West Indies have never lost to Zimbabwe in eight previous meetings, winning six times and drawing twice.
But even though the African nation are without a Test win in nine outings inside the last four years, Holder said the Windies would be professional in their approach and taking nothing for granted.
“They had a really good time in Sri Lanka the last tour they had and they seem to be very competitive,” the all-rounder noted.
“And obviously with the added boost of Brendan Taylor and Kyle Jarvis coming back into their squad, they’re pretty much at full strength as well.”
West Indies, ranked number nine in the World, have won just three Tests in their last nine matches but are coming off an encouraging tour of England when they stunned the hosts in the second Test at Headingley, despite losing the three-match series 2-1.
And Holder said the key objective on the pending tour would be to build on the recent successes, with the aim of winning the series.
“I just want the guys to focus on what we set out to achieve, just dialling in on the process,” the Barbadian stressed.Advertisement

“The result of the games will take care of itself once we do what is required. We have set out stuff in terms of being consistent.
“Consistency is something I’ve preached in the dressing room for a very long time and I think once we’re consistent in all departments we should get the results we’re looking for.”
West Indies open the tour with a three-day match against Zimbabwe A starting next Sunday before the first Test at Queens Sports Club which bowls off October 21.