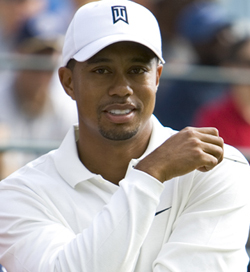 FORMER world No 1 Tiger Woods, sidelined from competition since August, said on Wednesday he is feeling “a lot better” as he continues his recovery from back surgeries but has no timetable for his return to the PGA Tour.
Last week, the 14-times major champion posted a video of himself swinging a golf club in an effort to shoot down recent reports that suggested he had endured setbacks during his rehabilitation process.
“As I announced last week, I am starting to feel a lot better,” Woods said on his website. “I have been chipping and putting at home, and recently started hitting nine-irons. That’s been so nice.
“The big thing right now is trying to get stronger and more flexible. Sitting out as long as I did, some weakening occurred, and I have a lot of work ahead of me.”
Woods, who has slipped in recent years due to injuries and mastering of a new swing, thought he was back to form after tying for 10th at the Wyndham Championship in August, following a dismal season in which he missed three cuts in the majors.
But three weeks later he had a second microdiscectomy surgery to alleviate pressure on a disc in his lower back, before needing another procedure on October 28 on the same area due to discomfort.
Woods, who made just 11 starts on the PGA Tour last season and only seven the season before, had his first back surgery in early 2014.
“While there is no timetable on my return to competitive golf, I want to play this game at the highest level again,” said the 40-year-old, the world No 1 for a record total of 683 weeks who is now stunningly ranked 446th.
“In order to do that, I have to get healthy. I’ve received many nice calls and texts from my fellow PGA Tour players and want to thank them for their support and encouragement. It’s a fraternity out there, and we’re all in this together.”Advertisement