NewZimbabwe.com can also reveal a ferocious tug-of-war between the white garmented and beard-keeping sect leaders over the late cleric’s death.

We have it on good authority that  the sect leaders kept Taguta’s death a secret for two days and only announced the sad news only after they had given up on the resurrection effort which went on for two days and two nights.

Members of the Taguta family confided with NewZimbabwe.com that the priest died on Thursday last week but was only announced early Sunday morning after fervent efforts to bring him back to life failed.

The sect’s counsels, for the two days, blocked his sons from accessing their father’s body aas they performed their rituals and warned them against announcing his demise hoping they would succeed in their undertaking.

Close relatives to the Taguta family, confirmed the squabbles to NewZimbabwe.com during his burial at the sacred summit of Chinyamukumba Mountain in Mafararikwa village, Mutare West constituency.

The relatives, who declined to be named, said church prophets chased Taguta’s sons away from his palace.

“After being informed of Mutumwa’s death on Sunday around 8am, we later received news from the palace, around 11am that he had risen from death. Since people were not allowed to enter the palace, the leaders who were allowed inside started peddling falsehoods that Taguta had resurrected,” one relative said.

“The priest’s sons, Noah and Nisbert, were chased away from the palace after their plea for church prophets to announce the death. They instead chased them away claiming they were no longer in good books with their father,” the relative said.

“They kept massaging the high priest’s body with cloths and washing it with hot water waiting for his resurrection,” the relative added.

Another close relative said the squabbles only subsided after headman Mafararikwa intervened.

“Headman Mafararikwa later convened a meeting on Tuesday. Tinashe Chiwandire and Brian Momberume quelled the squabbles thereby allowing all those who had been chased away to attend the meeting. That is when a consensus to announce the death was reached and then people started to properly mourn,” a family source said.

“Headman Mafararikwa was given the opportunity to check inside and they realised that Mutumwa’s body was now in inflammation state. The corpse was now decomposing. A coffin was then brought. Had it not been for the cold spell, Mutumwa’s body could have burst,” said the source.

He claimed appointment in government was blessed by the late apostolic sect leader.

Taguta is survived by 25 official wives, and more who are alleged to have been offered to him during the church’s gatherings numbering over a hundred.

He is said to have sired 120 children.

More than a thousand adherents gathered at Chinyamukumba Mountain to witness the burial of their leader. 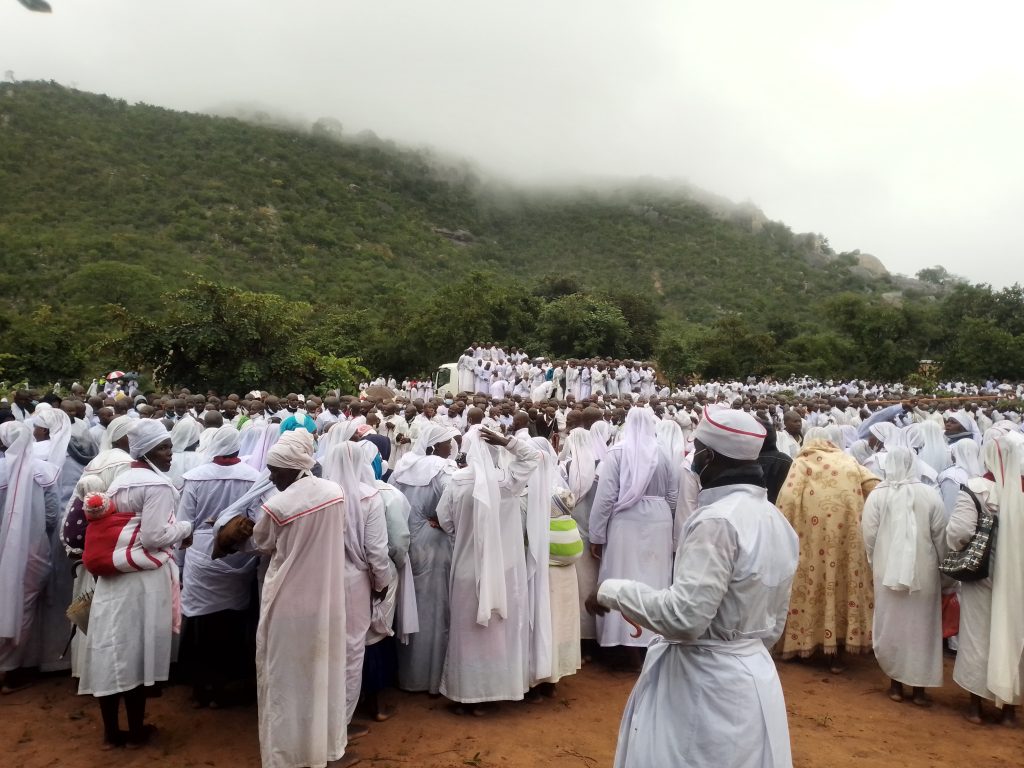