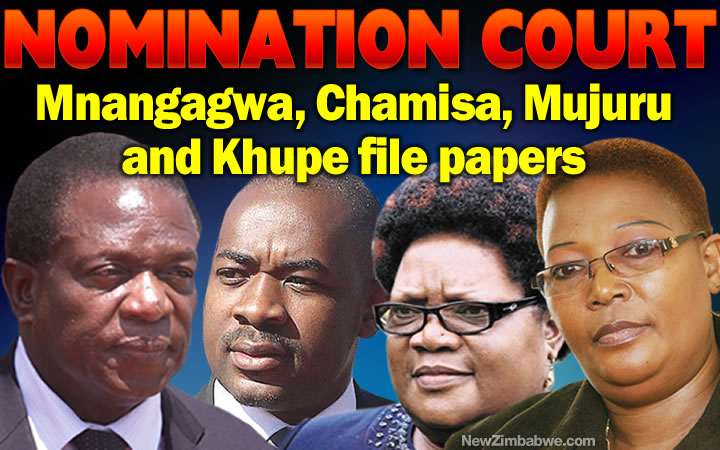 President Emmerson Mnangagwa, the 75-year-old former Mugabe ally who took power with the military’s help in November, faces a stern challenge from Nelson Chamisa, a 40-year-old who has energized the main opposition party.

Joice Mujuru, a Mugabe deputy for 10 years before she was ousted from the ruling party in 2014, and Thokozani Khupe, who leads a splinter MDC faction after falling out with Chamisa, also entered the presidential race.

“We have opened up the democratic space and everyone is excited, they feel they can enter the race and contest, which is good,” said Justice Minister Ziyambi Ziyambai, after filing Mnangagwa’s papers at the High Court.

Attempts by Chamisa to have Mujuru and Khupe join the MDC and its alliance of smaller parties have so far failed.

“It is unfortunate that we are in a situation where other parties have not seen the light to say that it is important for opposition forces to unite and rally behind one candidate,” said Jameson Timba, who presented Chamisa’s nomination papers.

Mnangagwa has pledged free and fair elections and invited Western observers for the first time in nearly two decades. Past elections were marked by alleged fraud.

The main opposition has raised concerns about alleged military involvement in this electoral process and demanded transparency in the voters’ roll and in the printing of ballots.

Mnangagwa and Chamisa are both campaigning on a pledge to revive an economy crippled by a legacy of often violent seizures of land from white commercial farmers and a black economic empowerment drive that targeted foreign-owned businesses.

Those policies were cornerstones of Mugabe’s near four-decade rule, which ended after last November’s de facto military coup.

ZANU PF says Zimbabwe is at a critical stage of transition requiring an experienced politician like Mnangagwa.

Chamisa, the 40-year-old leader of the opposition Movement for Democratic Change (MDC), says the president is equally to blame for the country’s economic troubles, since he served in each of Mugabe’s governments since independence in 1980.

Both arguments appear to have struck chords among the 5.4 million-strong electorate, 60 percent of whom are under 40.

While Zimbabwe lacks a reliable polling system, an unofficial survey released last week in Bulawayo by the Mass Public Opinion Institute put Mnangagwa on 42 percent and Chamisa on 31 percent, while 25 percent declined to disclose a preference.