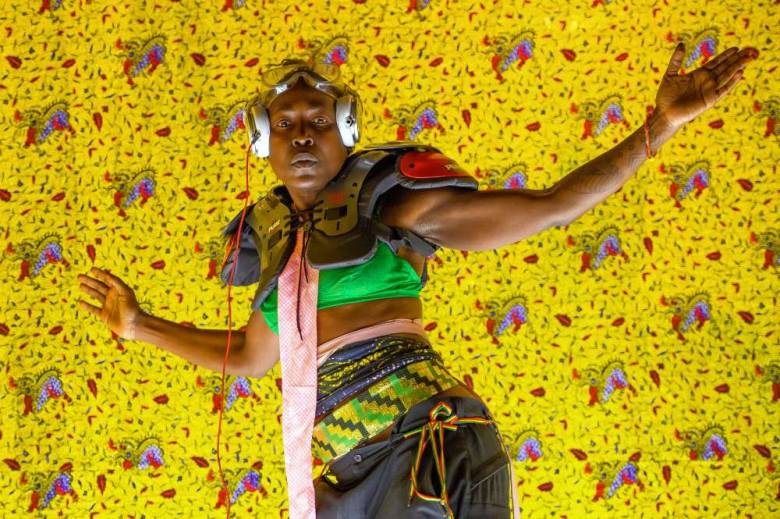 “I KNOW how to be in a black body,” said dancer and choreographer Nora Chipaumire, “but I don’t know what it is to be inside a black male body.”
Nevertheless, the Zimbabwe-born performer makes that dramatic leap when she brings the world premiere of her dance piece “portrait of myself as my father” to Alexander Kasser Theatre at Montclair State University this weekend.
“Portrait of myself as my father” takes place in a simulated boxing ring in which Chipaumire and Senegalese performer Kaolack are tethered together in a physically and emotionally exhausting duet. They are then joined by Shamar Watt, who plays the coach/corner man/cheerleader.
AFRICAN TURMOIL
The piece is an unflinching assessment of Africa and the black man, and how he has endured cultural upheaval, colonialism, Christianity and the struggle to achieve liberation. Along the way, Chipaumire addresses the question of what it is about the black male body that the world often finds challenging and frightening.
“I have been working around this theme of the sacrificial lamb,” explained Chipaumire. “I did an early piece called ‘Rite Riot,’ in which I placed myself as the black African female performer, in a box – almost like those mannequins in a window display. I was looking at the performer as the person who is sacrificed.
“I knew I wanted to do something that accompanied that piece, looking at how the father is the man in the family, and the importance that is placed on the man who has so much responsibility. So I thought, ‘This is how we sacrifice the man in this institution called the family.'”
And how does she explain the boxing ring? “I am so attached to Muhammad Ali,” she said, “I started looking at ‘Where do black men hold the imagination?’ And the only place where they do that, without any doubt, is in sports. So I had the image of the sports arena where the black man can be the superhero.
“So the boxing ring is one place where you can actually discuss violent commoditization, as well as the complicity of the onlooker. The audience is as complicit in the match as much as any spectator sport. It gave me a way to talk about bigger things, like the relationship between Africa and Europe, the process of colonization and the creation of the worker, then the commoditization of labor and the annihilation and the decimation of the African man and the African family.”Advertisement

SUPERHERO TO THE RESCUE
Chipaumire is also premiering her short film “Afro Promo #1: Kinglady,” which addresses male roles in somewhat lighter terms. “I’m looking at how men are globally,” she said, “so I started asking questions like ‘Where are the black superheroes? Are there any black superheroes?’
“My father was a rural schoolteacher, and he died very young. But that’s not the whole story that I want to talk about – I would like to have had a father that was a superhero, who is cool like Richard Roundtree in ‘Shaft.'”
After a night of intense messages, Chipaumire plans on finishing up the evening with a dance party featuring steamy African electronic dance music, spun by acclaimed DJ Rupture [Jace Clayton].
THE TAKEAWAY
For Chipaumire, the program is an exercise in engaging the audience in an almost primitive way. “I want them to be going, ‘Wow, I have not seen anything like that. This is amazing.’ I want people to kinesthetically, both from the film and the stage, feel the power of the human body, which is innate in all of us. And to have the ability to reflect on what does it mean to be alive.
“It’s live art,” she said simply. “It’s in the moment. It’s really a stretch of the imagination, and happily, theater is about stretching the imagination.”