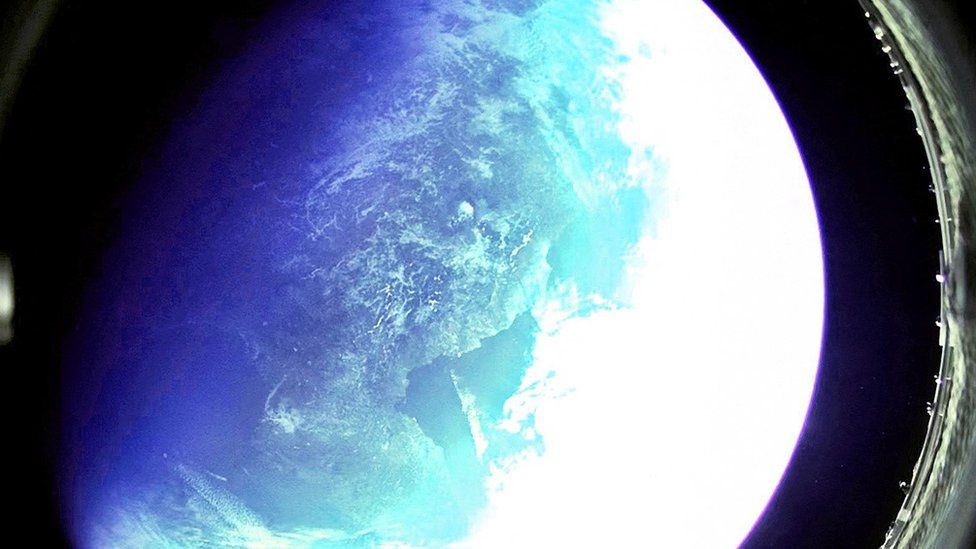 NORTH Korea has released photographs which it said were taken from its most powerful missile launch in five years.

At its full power it can travel thousands of miles, putting areas like US territory Guam within striking distance.

The latest test has raised alarm again among the international community.

Pyongyang has conducted a record number of seven missile launches in the past month alone – an intense flurry of activity that has been strongly condemned by the US, South Korea, Japan, and other nations.

The UN prohibits North Korea from ballistic and nuclear weapons tests, and has imposed strict sanctions. But the East Asian state regularly defies the ban.

Leader Kim Jong-un recently defended the need to build up an “invincible military”, and in 2019 he said North Korea was no longer bound by an earlier self-imposed moratorium on testing nuclear weapons and its longest range intercontinental ballistic missiles (ICBMs).

US officials on Monday said the recent step up in activity warranted renewed talks with Pyongyang.

What happened at the Hwasong-12 launch?

South Korea and Japan were both the first to report the launch on Sunday after detecting it in their anti-missile systems.

They estimated it had flown a moderate distance for an IRBM, covering a distance of about 800km (497 miles) and reaching an altitude of 2,000km before it landed in waters off Japan. At full power and at a standard trajectory, the missile can travel as far as 4,000km.

North Korea confirmed the missile launch on Monday through its state-run media reports. The country’s rogue tests are typically disclosed by state media a day after their occurrence.

State news agency KCNA said the missile test had been launched to “verify its accuracy”. It had been deliberately angled to land away “in consideration of the security of the neighbouring countries”.

State media also printed unprecedented imagery, some which they said were shots taken by a camera fitted to the missile’s warhead.

Two of the images show the moment of launch and the other apparently shows the missile in mid-flight, taken from above.

Kim Jong-un was not present to observe the launch, compared to three weeks ago, when pictures showed his attendance at the launch of a hypersonic glide missile test – a more advanced type of missile technology designed to circumvent missile-detection systems. Those missiles have only been tested by North Korea three times in total.

Why did North Korea fire the missile?

North Korea analyst Ankit Panda said Mr Kim’s absence, and the language used in the media to describe the launch, suggest that this test was intended to verify the missile system worked as it should, rather than to show off new technology.

Still, it is the first time that the Hwasong-12, a nuclear-capable missile of a significant size, has been launched since North Korea held talks with the US under the former administration of US President Donald Trump – which led to a slowdown in missile activity.

The last time the Hwasong-12 was tested was in 2017, when Pyongyang launched it six times including sending it twice over the Japanese island of Hokkaido, which triggered alarms for residents there.

Experts suggest there are multiple reasons for the ramp up in North Korea’s missile activity this year, which was first flagged by Kim in his New Year speech.

Analysts say the tests reflect Kim’s desire to pressure the US back into long-stalled nuclear talks, present a show of strength to regional and global powers, and could be borne out of a practical need to test out new engineering and military command systems.

The timing is also significant with Beijing’s Winter Olympics kicking off later this week, and South Korea’s presidential election in March.

“This is consistent with their past behaviour to try and intimidate South Korea and the incoming president,” said Dr Daniel Pinkston, an international relations professor from Troy University who lives in South Korea.

There’s also been a surge in tests as the North Korean economy struggles under US-led sanctions, pandemic difficulties and decades of mismanagement.

Earlier this month, the US imposed more sanctions on North Korea.