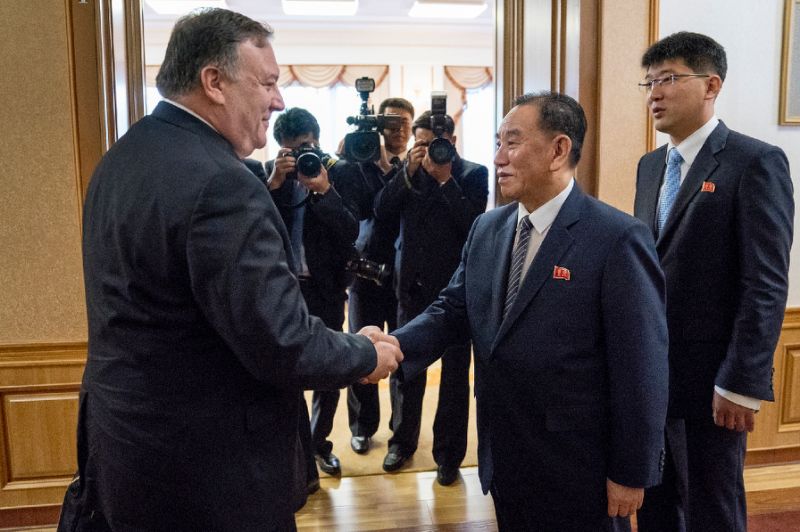 The peace process between the United States and North Korea was in crisis Sunday after Pyongyang angrily rejected Washington’s “gangster-like” demand for rapid nuclear disarmament, despite two days of intense talks.

When US Secretary of State Mike Pompeo flew out of Pyongyang after negotiations with North Korean leader Kim Jong Un’s right-hand Kim Yong Chol man he tried to appear positive, insisting progress had been made.

But as he arrived in Tokyo to brief his Japanese and South Korean counterparts, his North Korean hosts issued an angry statement rejecting his efforts and appealing to US President Donald Trump to revive the peace process.

Speaking privately, US officials suggested the North Korean statement was a negotiating tactic. But after two days of theatrical amity in Pyongyang it appeared to mark a return to the North’s traditional hardline position.

The North’s foreign ministry took exception to Pompeo’s effort to secure concrete commitments to back Kim’s promise, made at a summit last month with US President Donald Trump, to work towards the “denuclearisation of the Korean peninsula”.

And it did so in stark terms, according to a statement relayed by the KCNA state news agency.

“The US is fatally mistaken if it went to the extent of regarding that the DPRK would be compelled to accept, out of its patience, demands reflecting its gangster-like mindset,” the statement said, referring to North Korea by its official initials.

Pyongyang noted that it had alrady destroyed a nuclear test site — a concession that Trump has already publicy hailed as a victory for peace — and lamented that Pompeo had proved unwilling to match this with US concessions.

It dismissed Trump’s unilateral order to suspend joint US and South Korean war games as a cosmetic and “highly reversible” concession and criticised US negotiators who “never mentioned” the subject of bringing the 1953 Korean War to a a formal end with a peace treaty.

“We thought that the US side would come with a constructive proposal which accords with the spirit of the DPRK-US summit meeting and talks,” it added. “But this expectation and hope of ours were so naive as to be gullible.”

The North Korean statement came in stark comparison to the hopeful words Pompeo had given reporters before boarding his plane to Tokyo, and appear to represent a set-back to the process initiated between Kim and Trump last month.

Pompeo had characterised the meeting as a success, but critically he failed to present any new details as to how North Korea would honour its summit commitment to “denuclearise” in exchange for US security guarantees.

“These are complicated issues, but we made progress on almost all of the central issues, some places a great deal of progress, other places there’s still more work to be done,” Pompeo said.

Last month, Kim agreed to “work towards complete denuclearisation of the Korean Peninsula” in return for security guarantees and an end to a dangerous stand-off with US forces.

Trump hailed this as a successful resolution of the crisis. But the short joint statement was not a detailed roadmap to disarmament and it fell to Pompeo to follow up and put meat on the bones of the sparse commitment.

“We talked about what the North Koreans are continuing to do and how it’s the case that we can get our arms around achieving what Chairman Kim and President Trump both agreed to,” Pompeo said.

“No-one walked away from that, they’re still equally committed,” he said, just hours before the North issues their own, less optimistic, view of the negotiations.

In practical terms, Pompeo mentioned only that officials from both sides would meet on July 12 as a working group to discuss the repatriation of the remains of some US soldiers killed during the 1950-1953 Korean War.

US Secretary of State Mike Pompeo was greeted on his third trip to Pyongyang by Kim Yong Chol, Kim Jong Un’s right-hand man

And he said some progress had been made towards agreeing “the modalities” of North Korea’s destruction of a missile facility.

Professor Yang Moo-Jin at the University of North Korean Studies in Seoul said Pyongyang wants to separate “US bureaucrats from President Trump, expressing trust in him”.

“This is not to break the talks. The North is trying to get an upper hand in further negotiations,” he explained.

“North Korea expected Pompeo to bring a concrete proposal for security guarantee but it was disappointed as the US side reiterated the old demand that the North should denuclearise first before the US gives it anything in return.”

Pompeo, who was on his third visit to Pyongyang, began the outreach when he was still Trump’s CIA director and remained the pointman on negotiations after the process became public and he became secretary of state.