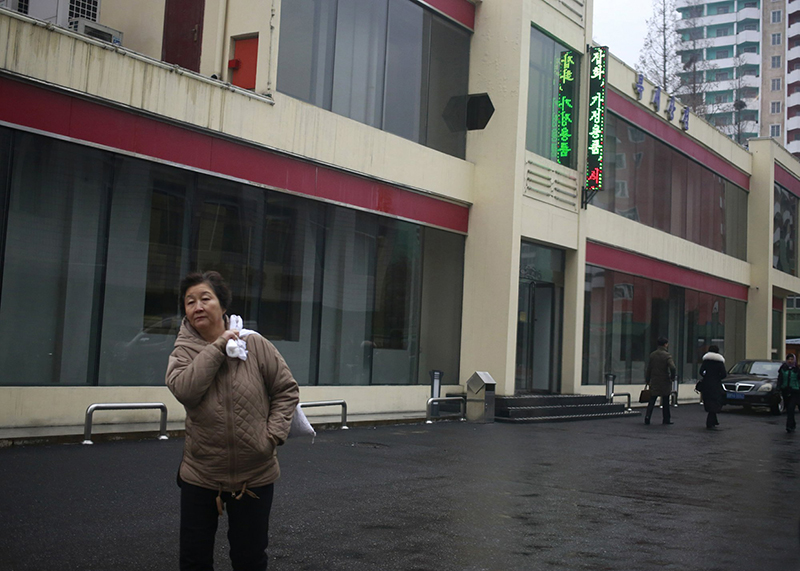 PYONGYANG: Despite the unwanted publicity of a criminal trial for one of their main suppliers, business is booming at Pyongyang’s ‘Singapore shops,’ which sell everything from Ukrainian vodka to brand-name knock-offs from China.

The stores stock many of the very things United Nations’ sanctions banning trade in luxury goods are intended to block and provide a nagging reminder that not all potential trade partners are lining up behind the U.N.’s pronouncements or the Trump administration’s policy of maximum pressure on the North.

Especially when there’s a buck — or a few million bucks — to be made.

The stores are anything but secret.

They are well marked, open to walk-ins and distribute their own membership cards to reward regular customers. Until recently, the name of their Singaporean partner, the OCN Group, was printed on the Bugsae shop’s plastic shopping bags.

And while being the focus of the court case that could land OCN’s former director in prison for a very long time, they continue to unabashedly specialise in imported products — perfumes, fine jewellery, wines, clothing and cosmetics — that would appear to blatantly violate U.N. restrictions.

Formally known as the Potonggang Ryugyong Shop and the Bugsae Shop, the stores are a fixture of the upscale shopping scene in Pyongyang, catering to the capital’s elites, Chinese businessmen and members of the diplomatic corps. Purchases can be made in dollars, euros and Chinese yuan. The price in each is displayed digitally on the cash register.

Both stores have been substantially renovated since last summer.

The Ryugyong store now has a coffee shop behind the imported shoe section on its second floor. The Bugsae shop has installed dark wood paneling and glass casing for its wines and spirits corner, which was recently dominated by vodkas from the Ukraine.

It has separate display areas for snacks and soft drinks from Japan, Malaysia and China, a row dedicated to fancy shampoos, and a section in the rear for imported electronic appliances and household goods.

The well-stocked shelves belie the hit supplies must have taken with the arrest of their former Singaporean trading partner.

Ng Kheng Wah, 56, faces 80 charges of violating United Nations sanctions for allegedly supplying $6 million worth of luxury goods to the Bugsae Shop from 2010 to 2017. This includes watches “clad with a precious metal,” jewellery, musical instruments and wine. While OCN is not mentioned, the charges accuse Ng of trying to defraud banks through another of his companies, T Specialist International.

Ng, who stepped down as an OCN director in March, also faces 81 charges for working with a partner identified as Wang Zhi Guo to deceive DBS, the Oversea-Chinese Banking Corp. Ltd and Malayan Banking Berhad to carry out his deals, issuing false invoices for the sale of Watari Instant Noodles to T Specialist, most amounting to hundreds of thousands of dollars.

Ng was charged on July 18 and granted bail of 500,000 Singapore dollars ($364,645). A pretrial conference is scheduled for Jan. 17. For each offence under the U.N. sanctions act, Ng faces a maximum sentence of five years in jail and a 100,000 Singapore dollars ($72,929) fine. Each cheating charge comes with an additional maximum jail term of 10 years and an unspecified fine.

Singapore authorities have accused another Singaporean and a North Korean man of helping to supply luxury goods to Pyongyang. They are also investigating a Singaporean businessman who is facing criminal charges in the United States for allegedly violating sanctions against North Korea.

Ng denied any wrongdoing in an interview with the Singaporean newspaper The Straits Times shortly after reports of possible violations became public. He said OCN was the sole distributor of the popular Japanese Pokka brand canned drinks in North Korea from 2000 and 2012, but claimed OCN dropped that when Japan imposed sanctions banning such exports.

Documents presented in court show that in early 2014 his other business, T Specialist International, presented a bogus invoice to a bank from which it was seeking a loan, claiming it had received $522,410 for Pokka sales.

The case hints at an uncomfortable truth that has long hamstrung efforts to make sanctions enforcement really bite: engaging the North is not as uniformly taboo with potential trading partners as Washington might like.

China has long been Pyongyang’s biggest pipeline. With Ng on trial, it’s almost certainly where most of the Singapore shops’ goodies come from, even if they originate elsewhere. The two countries have a long border, a rail connection, and almost-daily flights between their capitals that allow for the transport of a significant amount of goods.

Russia is another important trader. So have been interests in countries like Egypt, which helped fund and set up the North’s mobile phone system, and HB Oil of Mongolia, which was involved in a 2013 deal to build gas stations in Pyongyang.

Singapore, which in June hosted the summit between President Donald Trump and North Korean leader Kim Jong Un, has relatively close ties with the North. North Korea runs an embassy in Singapore, though Singapore does not have an embassy in Pyongyang.

The two also have a long history of doing business.

While rumours swirled about how the Trump summit might lead to the North getting its first McDonalds, a trio of Singaporean businessmen had already gotten the jump on the Pyongyang burger market, in 2009.

Burgers hot off the grill of the chain of fast food restaurants started by Patrick Soh, Quek Cher Lan and Timothy Tan called “Samtaesong,” or Three Big Stars, are almost required eating at an amusement park next to Kim Il Sung Stadium.

The menu at another somewhat fancier Samtaesong outlet has a wide selection of coffee, smoothies, fried chicken and even “Sausage, Egg and Cheese McGrddles” on its menu.

Soh, also speaking to The Straits Times, claims to currently receive no income from the restaurants and says he has cut back his travel to Pyongyang.