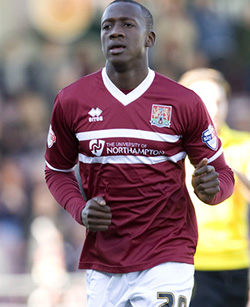 NORTHAMPTON have terminated the contract of Zimbabwean David Moyo after the striker fell down the pecking order at the League Two side.
Coach Chris Wilder admitted he didn’t see the 19-year-old striker’s featuring in his first team plans after Moyo’s Sixfields contract was ripped up earlier this week.
Moyo has made only five appearances for the Cobblers this season, scoring in his last two back in October, but his deal has been cancelled and he has since signed for Conference North neighbours Brackley Town where he spent time on loan.
Wilder said the move could help the teenager, who represented his country at U23 level, kick-start his career and believes it was in the youngster’s best interests to move on and have the opportunity of regular football.
“I was always going to bring the numbers down and I didn’t think David would get a run in the side,” said Wilder.
“Sometimes you have to make a decision, I did and David goes to Brackley with our best wishes as he’s a good lad.
“I looked at it, I’ve got Emile [Sinclair], I’ve got John-Joe [O’Toole] who has been playing, Ivan [Toney] to come back in and Marc Richards, I think sometimes you’ve got to make decisions for the players as well.
“There’s going to be a ridiculous amount of players at the end of the season who’ll be without football clubs and David does really need to play football.
“If he does well that’s great and he kick-starts his career but for him to just be hanging around the place, be a sub or not in the squad, I don’t think that’s right for David and for us and we move on.”
It has been a busy first half of the January transfer window with Moyo one of eight players to depart Sixfields in the past two weeks.
Wilder said he expects to have completed his transfer dealings for the month, but revealed that he is always on the look-out if anyone becomes available who can improve the squad.
“I think sometimes it comes to a point where you’ve got to have a settled group of players but you’ve always got to try and look if something comes up that you think can make you better,” he said.
“I don’t think I’d be doing my job to just say that’s us done and think we’re the finished article because we’re not. There is still a lot of work to be done.”Advertisement