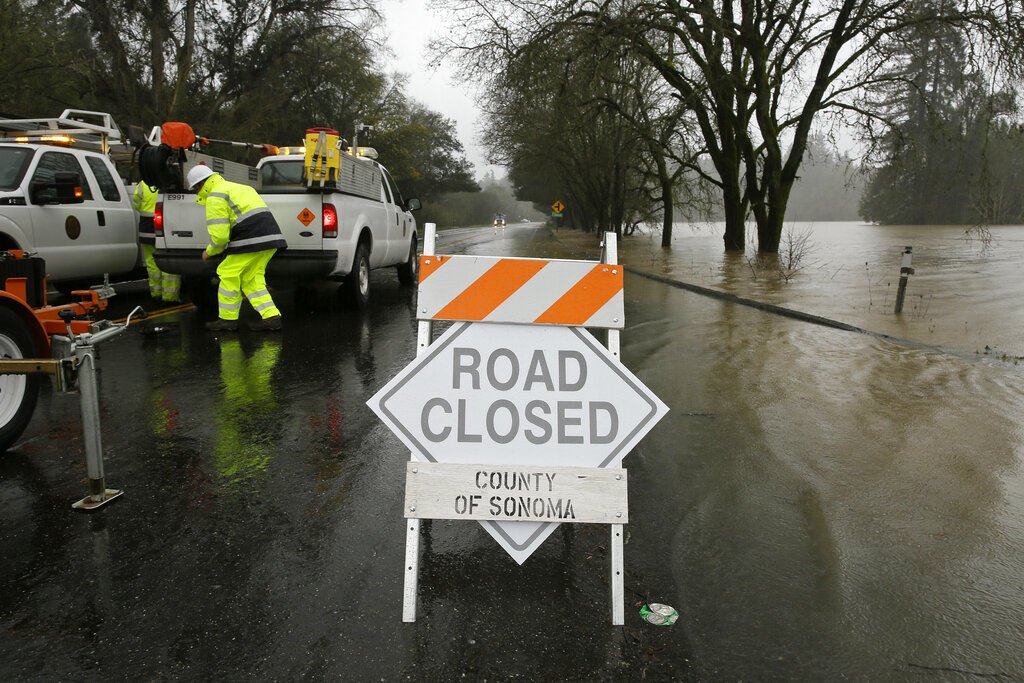 The towns of Guerneville and Monte Rio were hardest hit by water pouring from the Russian River, which topped 13m late on Wednesday night, said Briana Khan, a Sonoma County spokeswoman.

The river frequently floods in rainy weather but it hadn’t reached that level for 25 years and wasn’t expected to recede again until late on Thursday night.

About 3 500 people in two dozen communities along the river remained under evacuation orders.

Jeff Bridges didn’t leave even though he said the water was 2.44m deep in some places.

The co-owner of the R3 Hotel in Guerneville, said he and others who stayed behind were well-prepared to ride out the storm. He and employees moved computers, business records and furniture to second-floor room.

“As long as everybody is safe, dry and warm, it’s all fine. You just ride it out,” said Bridges, noting that this flood was the fourth he’s experienced in 33 years.

He added: “People in Florida have hurricanes, people in Maine have blizzards; we have floods,” he said. “It’s the price we have to pay to live in paradise.”

The river was one of several in Northern California that was engorged by days of rain from western US storms that also dumped heavy snow in the Sierra Nevada, throughout the Pacific Northwest and into Montana, where Gov.

Steve Bullock signed an emergency order to help keep up the supply of heating fuel amid frigid temperatures.

Two Amtrak trains together carrying nearly 300 passengers stopped and reversed directions because of an avalanche that closed railroad tracks in the Sierra Nevada.

In Idaho, the mountain town of Stanley became marooned Wednesday after all three highways leading to the town were closed because of drifting snow, avalanches and the risk of more slides.

Several areas in California set record-high rainfall totals in recent days, including nearby Santa Rosa, which had nearly 20cm of rain in one day.

The often-waterlogged Venado weather station 8km from Guerneville recorded more than 50cm of rain in 48 hours.

Elsewhere in Northern California, dozens of people had to be rescued from cars stranded while motorists tried to drive through flooded roads.

Nina Sheehan, who is visiting from North Carolina, had to abandon her rental SUV after it got stuck in a flooded hotel parking lot.

“We made a decision to take the rental car through the waist-high water and we got two thirds of the way and then the car stalled,” she said.

“Do not try to go through any water over a foot high because you never know what you’re going to find.”

Firefighters in Monte Rio worked through the night pulling people out of cars stuck in flooded roadways and getting people out of their homes as water approached, Fire Chief Steve Baxman told the Press-Democrat newspaper of Santa Rosa.

“We took 17 people out of cars and houses during the night. Too many people are driving into water,” he said.