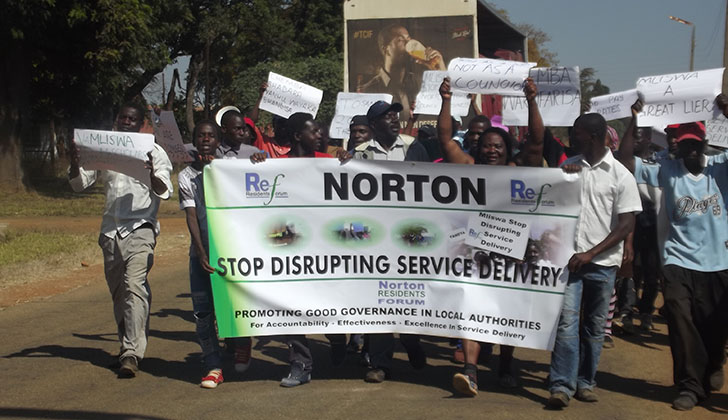 Kizito Muhomba (51) and 12 Norton councillors appeared before Harare magistrate, Stenford Mambanje, and they were granted ZW$50,000 bail each.

Allegations are that on December 3, 2019 during a Housing and Community Services meeting, the councillors recommended that residential stands ranging from 2000 square metres to 5199 square metres be sold to councillors and council management at ZW$30 per square metre as intrinsic value of the land.

The matter was allegedly referred to the Finance Committee on December 16 2019, which referred it back to a full council for consideration.

Court heard that a full council meeting was held on December 19 2019 and all the councillors who were present adopted the price of ZW$30 as intrinsic value of the land.

They allegedly disregarded the evaluation report from the Ministry of Local Government which pegged the residential stands at between US$8 to US$13 per square metre.

Eight residential stands were allegedly allocated to councillors as part of their condition of service on February 13 2020 and part payments were effected during that same period.

Residential stands allocated to councillors during their term of service are subject to 40 percent discount as per Ministry of Local Government and Public Works regulations.

After considering the discount, the stands were allegedly sold at ZW$18 per square metre.

According to court papers, by passing a resolution to sell residential stands at ZW$30 per square metre, the councillors, who are responsible for passing policies and making resolutions to be implemented by council management, acted inconsistently with their duties as public officials as they discounted the price so as to favour themselves.

Investigations were made, which led to the arrest of the councillors.