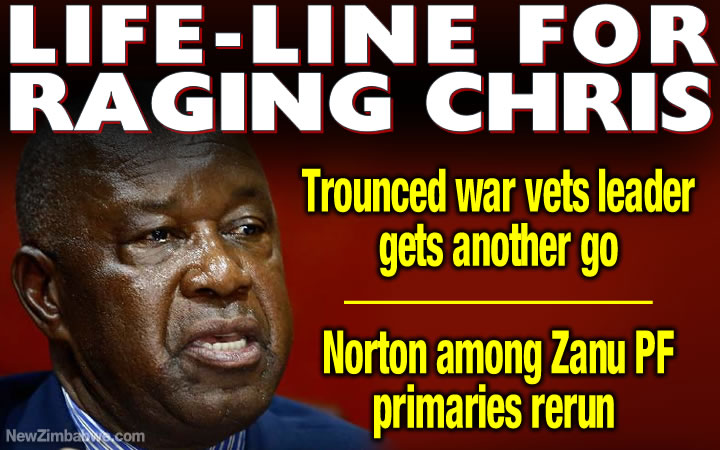 ZANU PF has reportedly ordered a rerun of the party’s primary elections in Norton, among other constituencies, giving President Emmerson Mnangagwa’s special advisor Christopher Mutsvangwa a new lease of life.

Mutsvangwa, who also leader of the war veterans’ association, had reacted angrily after being humiliated by political upstart Langton Mutendereki.

However, a politburo list leaked at the weekend indicates that Norton is one of the constituencies where the primary elections must be conducted anew.

According to the statement dates for the reruns will be announced “soon.”

“The teams to supervise these elections will also conduct elections in local government wards were elections were not held.

“Results of the reruns will affect results for senatorial, women’s quota, provincial councils in the affected constituencies,” said the statement from the Zanu PF commissariat department which is headed by Engelbert Rugeje.

Rugeje came under fire especially from Mutsvangwa for using the “police to rig” the primary elections.

The war veterans’ leader further warned that Mnangagwa might lose the presidential vote if the primary election results were allowed to stand.

Ironically, Shamu has to contend with a rerun in Chegutu East constituency; ditto Chegutu West counterpart Dexter Nduna who was arrested for firing a gun in the chaos that rocked the internal polls.
Meanwhile, in Gutu East, sitting lawmaker Berita Chikwama initially reported to have lost to Central Intelligence Organisation (CIO) deputy director (administration) Mafio Mlamba but later announced as winner will go through the process again.
A rerun has also been ordered in Harare South where war veterans spokesperson Douglas Mahiya left seething after losing to Mnangagwa’s nephew Tongai.

Elsewhere, former Cabinet minister Nicholas Goche will continue to fight for his political life with another go against one Zex Pamacheche for the right to represent Zanu PF in Shamva North.