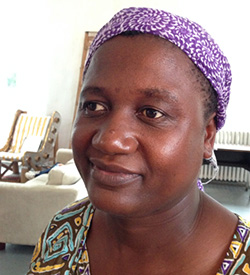 HIO University’s African Studies Program and the Centre for International Studies, with support from Arts for Ohio, will welcome back Patience Munjeri, virtuoso mbira player from Zimbabwe, for a performance on Friday, Aug. 28.
Munjeri (previously known as Patience Chaitezvi) performed at OU in 2013 for an enthusiastic audience.
Not only is she is one of Zimbabwe’s rare female mbira players, but a recognised mbira master and educator who is deeply rooted in the spiritual musical tradition of her country.
In addition to the concert, Munjeri will also hold a demonstration class on Saturday, Aug. 29, at 10 a.m. in the Front Room Coffeehouse in the Baker University Centre. Both these events will be free and open to the public.
A teacher by profession, Munjeri works at a local high school in her hometown of Chinhoyi, where she is also an important advocate for the high number of orphan students.
It is very uncommon in Zimbabwe to have a woman who is highly educated and also deeply immersed in the spiritual traditions of her culture. As a result, Patiene is also skilled at explaining very complex subjects to international students.
Munjeri holds a BA in Divinity with a specialty in Comparative Religion.
Her academic interests and vocational experience in teaching are integrated in her published books, Mapira: Shona Ceremonies (2013) and Shona for Mbira Players (2008). She is also featured on numerous recordings.
For her performance at OU, Munjeri will be joined by Mbira Dziva, a duo from California (Tom Melkonian and Melissa Cara Rigoli).
Melkonian and Rigoli have studied and played mbira for many years. In addition, both have university degrees in music and have travelled to Zimbabwe independently to further their studies.
Today, Mbira Dziva performs regularly with visiting Zimbabwean mbira players and have been encouraged by their teachers to teach mbira to their local community in Santa Cruz, California.
With the support of several Arts for Ohio grants, the OU African Studies Program has used African music as a “hook” to draw students and community members to a wide range of Africa-related academic and cultural events.
This article was first published by Woub Digital.