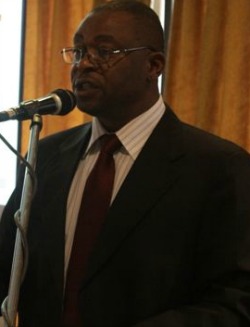 MARONDERA:  Lands minister, Douglas Mombeshora has defended the government’s controversial and violent land reform process as non-racial saying some white farmers were still farming in Zimbabwe.
Mombeshora made the remarks while addressing delegates at the Zimbabwe Farmers Union (ZFU) annual congress in Marondera.
“We are not racists. Land reform was actually meant to bring in the previously marginalised population and those are the resettled farmers,” Mombeshora said.
“This is why up to today we have (white) farmers who are still operating here who were operating before independence and we want to work with them. Those who want to work with us are welcome to be with us and we welcome to be with them,” he said.
Mombeshora said he recently travelled to Washington D.C in the US to resolve the issue of former white farmers who had taken the government to court claiming the land reform process was racial.
“But the truth is that it was not racial. We could not take away land from the blacks; they did not have the land.  We only took from those who had it and those who had the land were white farmers, so it is not a racial issue,” Mombeshora said.
However, at a recent Zanu PF rally in Marondera, President Robert Mugabe, threatened to embark on fresh land grabs targeting all the remaining white farmers.
“We told Tony Blair (former British prime minister) to keep his England and we keep our Zimbabwe because land is our heritage.  We have discovered that in Mashonaland East province alone, there are 73 white farmers who are still occupying some farms when our people do not have land,” Mugabe told his party supporters.
“We are going to take those farms and redistribute them to our youths,” he said.
Thousands of white farmers and their employees were left stranded after the government undertook a violent fast-track agrarian reform in 2000.  The land grab also left scores of farmers and employees dead.
However, most of the grabbed farms have become derelict because the resettled farmers either do not have adequate resources for farming or have no experience.
Advertisement