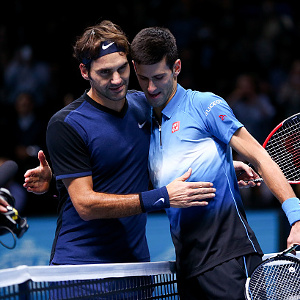 NOVAK Djokovic and Roger Federer are poised to become the first $100 million men in tennis in 2016, in a gripping sub-plot to the new Grand Slam season.
No player in the history of the sport has broken through the $100 million on-court earnings barrier but world No 1 Djokovic and Federer, the No 3, should reach the landmark next year.
Djokovic, 28, has just over $94 million in prize money while Federer, six years the Serb’s senior, has banked $97.3 million.
With $3.85 million on offer for the winner of January’s Australian Open, the season’s first major, the veteran Swiss would be the first man to the magical number even if the odds are heavily stacked against a player who won the last of his 17 Grand Slam titles in 2012.
The staggering rewards for the modern player, all boosted by lucrative off-court earnings through sponsorship and endorsements, are a far cry from the heavyweights of the sport who starred in earlier eras.
Rod Laver, the last man to complete the calendar Grand Slam – something that eluded Djokovic courtesy of a French Open final loss in 2015 – ended his playing career with $1.5 million, still a huge sum by the standards of the late 1960s.
John McEnroe earned $12.5 million while Federer’s hero, Pete Sampras banked $43 million before he retired in 2002.
Djokovic earned a season record $21.5 million in 2015, a year which saw him win three of the four majors – taking his total to 10 in total.
“My season was the best of my career with many highlights. It inspires me even more to keep on going, and I hope to continue to play at this level in 2016,” said Djokovic.
Despite his dominance of the sport, Djokovic still has some catching up to do when it comes to matching Federer’s overall personal fortune.
According to Forbes’ rich list, Federer was the fifth highest-earning sportsman in 2015 thanks to $58 million in endorsements.
Djokovic was 13th, his on-court wealth boosted by $31 million worth of commercial riches.
But the Serb knows time – and the form which saw him win 82 matches and suffer just six losses last season – is on his side.
“I think I have a good chance. I’m 28 and I still don’t feel like the end is anytime soon, that definitely excites me and motivates me to keep going.”
The staggering wealth in the men’s game dwarfs the women’s tour.Advertisement

Serena Williams’s on-court earnings stood at just over $74 million after a 2015 season which saw the American also claim three of the the four Grand Slam titles.
Rival Maria Sharapova, the world’s richest sportswoman due to her lucrative off-court portfolio, has earned less than half than Williams – $36.4 million.
Back in the men’s game, 14-time major winner Rafael Nadal has banked $75 million on court while current world No 2 Andy Murray has earned $42.5 million.