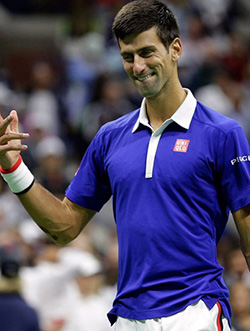 NOVAK Djokovic may never be the people’s champion, but with a 10th Grand Slam title wrapped up and his rivals flagging, the Serb is on course to be the sport’s greatest player.
The 28-year-old became only the eighth man in history to reach double digits in totals of Slams won and now stands just seven behind the record of Roger Federer, the man he vanquished in Sunday’s US Open final.
It may seem a huge target to chase, but Djokovic is six years younger than Federer.
His second title in New York was his third major of the year to add to the Australian Open and Wimbledon victories.
Only a third defeat in four years at the French Open final prevented him from celebrating what would have been the first calendar Grand Slam since 1969.
It was also a major psychological boost for Djokovic who had lost four finals in New York before Sunday’s 6-4, 5-7, 6-4, 6-4 win.
It was the second time after 2011 that he had won three of the four Grand Slams in the same season.
Djokovic has now won nine of the last 20 Slams and finished runner-up in six others.
By contrast, 34-year-old Federer has not added to his 17 Grand Slams since Wimbledon in 2012 and has lost five of his last seven finals at the majors.

World No 3 Andy Murray is still stuck on two with the most recent coming at the All England Club in 2013.
Rafael Nadal, meanwhile, is the equal second best of all time alongside Pete Sampras with 14 Slams but outside of the French Open, his last major came in New York in 2013.
Djokovic is also the model of consistency. The last time he failed to make at least the quarterfinals of the majors was when he slipped to a third round loss at the 2009 French Open.
BORG AND LAVER
“I’m so flattered and honoured to be a part of an elite group of players, legends of our sports to manage to win this many Grand Slam trophies,” said Djokovic who is just one shy of going level with Bjorn Borg and Laver on 11 majors.
“So to be just mentioned alongside them is truly something special. I’m 28. I have always valued the care for my body, and my mind and had this holistic approach to life.
“I always thought this is utmost importance for my tennis. I will continue on with the same kind of lifestyle, same kind of approach.Advertisement

“Hopefully this kind of approach will give me longevity and that I can have many more years to come, many more opportunities to fight for these trophies.”
His confidence has been boosted by seeing his rivals flag in 2015.
Victory on Sunday took Djokovic to 63 wins for the year against just five defeats. He also has seven titles.
Federer has five titles and 51 wins against eight losses.
The Swiss was runner-up at Wimbledon and in New York but was a third round loser at the Australian Open and made just the quarterfinals in Paris.
Murray has 59 wins and 10 losses with four titles on the year.
After finishing runner-up to Djokovic in Melbourne, he was a semifinalist at the French Open and Wimbledon and a fourth round loser in New York.
Nadal’s season has been a catastrophe by his high standards, quarterfinal runs in Australia and Paris followed by a second round exit at Wimbledon and third round loss in New York.
Djokovic is also becoming almost impossible to beat down.
On Sunday, he saved 19 of 23 break points against Federer and six of seven in his Wimbledon final victory over the Swiss.
Even in his French Open final defeat to Stan Wawrinka, he saved 11 of 15 break points and seven of 12 in Melbourne.
Federer believes that Djokovic is becoming an unstoppable force.
“Are you kidding me?,” he barked when asked if his rival was going to keep adding to his tally.
“He’s just really consistent. Seems like there are not many guys that can hang with him, don’t have the tools or dare to go forward, or they don’t dare to serve and volley against him because he’s so good on the return.
“He has perfected his game on the hard courts, no doubt about it. He was always a great clay-court player, and because he moves as well as he does, he’s solid and consistent now on the grass.
“He’s having an unbelievable career. He already has a ton, so obviously he’s got to stay healthy and hungry, but obviously you would think he will win more.”