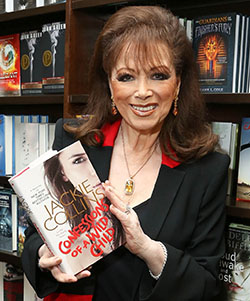 BEST selling author Jackie Collins whose work dramatised the lives of the rich and treacherous has died of breast cancer in Los Angeles aged 77, her family has said in a statement.
“It is with tremendous sadness that we announce the death of our beautiful, dynamic and one of a kind mother, Jackie Collins, who died of breast cancer today,” the statement read.
“She lived a wonderfully full life and was adored by her family, friends and the millions of readers, who she has been entertaining for over four decades.
“She was a true inspiration, a trail blazer for women in fiction and a creative force. She will live on through her characters, but already miss her beyond words.”
Collins – who was born in London in 1937 and was the sister of actress Joan Collins – wrote over 30 best-selling novels during her long career.
Her career spanned four decades and she sold more than 500 million books in 40 countries across the world.
She was diagnosed with breast cancer in 2009, but kept the details of her illness mostly to herself, according to People magazine in the US.
Collins began writing as a teenager, making up racy stories for her schoolfriends, according to a biography on her website.
Her first novel, The World is Full of Married Men, was published in 1968 and became a bestseller.
In 1985, her novel Hollywood Wives was made into a mini-series by ABC, starring Anthony Hopkins and Candice Bergen.Advertisement