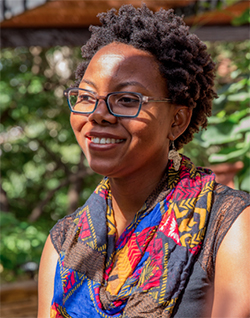 Writing about Zimbabwe while living in the US has changed her language and her identity, says NoViolet Bulawayo, the author of “We Need New Names.”
DW met up with the young African writer on her first visit to Germany.
Ms. Bulawayo, you teach fiction at Stanford University. How do your colleagues and students address you?
NoViolet. That’s the name I go by. Elizabeth Tshele, even though it’s my birth name, is the name that is just in my official documents. I like to remind people that I come from a culture where you grow up with quite a bunch of names.
Why did you choose this name, NoViolet Bulawayo?
It’s from my mother’s name, actually. My mother was named Violet. She passed away when I was 18 months old, and she wasn’t really spoken about that much. I grew up with a sense of something missing. I decided when I was at a certain age to honour her. “No” in my language means “with.” Of course Bulawayo is my city, my hometown. And being in the US for about 13 years without being able to go home made me very homesick. So it was my way of staying connected.
Why do we need new names?
I wrote the novel at a specific time of my country’s history. Recent history, I should say, when the country was coming undone, due to failure of leadership. And by saying “we need new names” I was speaking for the need for us as a people to sort of re-imagine, rethink ourselves, rethink our way, think about where we were going. We needed new ways of seeing things, new ways of doing things, new leadership. It was basically a call for renewal. But it should not be confined to Zimbabwe. I believe you can translate across borders.
Many readers think your novel “We Need New Names” is strongly autobiographical. Or is it not?
Not as much as most people think. There are parts of me as in most of my work. I like to write from the bone. Even if it’s just a small part I feel like it gives my work the certain charge. The first half of the novel does not have much of me. Darling, the narrator and main protagonist in Zimbabwe, does not have a strong connection with me. My childhood was very normal and beautiful. Zimbabwe in the 80s was this land of promise. We grew up as kids in working countries grow up – because the country at that time was really functional.Advertisement