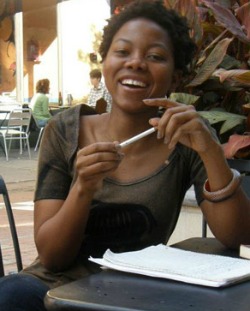 YOU come across a title like We Need New Names and a writer whose given name is NoViolet and you begin to wonder.  What gives?  Especially with other characters in the novel named Godknows, Bornfree, Lovemore, MotherLove, Forgiveness, Messenger, Welcome and Prayer. There’s a simple explanation – the Zimbabwean tradition of giving quasi-religious name – surprising, of course, to the first-time visitor.
On my last trip I met a young woman called MoreBlessing; on an earlier trip a man named Wireless, but that was a bit of an accident because his illiterate mother saw the word on a Grundig shortwave radio and decided to use it for her newborn. I actually think that’s a fairly accurate name for a number of people I’ve known, but that’s another matter.
So you’re reading NoViolet’s novel and wondering what gives.  But then you come to a scene describing the friends of a young woman who is pregnant and their worry that if she has the child (the result of a rape by her grandfather), she’ll be trapped, stigmatized for the rest of her life.
They decide that the best thing would be for her to abort the child and – with their limited medical knowledge – and with their attempt the gain some cognitive distance from what they are undertaking, they decide to take on different names: Dr. Bullett, Dr. Cutter, and so on.  All the girls in this scene (including the one who is pregnant) are twelve or thirteen years old, but they have enough insight to understand the weight of their decision and why it might be best to assume new personas during the procedure.
Mostly, the scene is a bleak commentary on life in Zimbabwe during the recent years when it has appeared to most people that Mugabe will live forever, nothing will improve in the country, conditions will only get worse. These appalling condition – especially the lack of nutritious food – are highlighted at the opening of the novel.  A group of mostly pre-teen girls and boys steal guavas from properties of the rich.
The narrator, whose name is Darling, describes life on the streets, petty crimes, state harassment (including slums being bulldozed), white property eviction – many of the events that have been in the news ever since Mugabe decided he would sacrifice the country in order to keep his war cronies in power.  People have AIDS, too many rely on religious and/or medical quacks. The Chinese presence is everywhere (a character says that Chinese has become the national language). Those with any resistance or drive still in them long to flee the country in search of a better place – anywhere.Advertisement

Not a pretty picture, and you begin to wonder where the story is going.  Then, all at once it happens.  Mid-point through We Need New Names, you begin a new chapter and Darling is suddenly in the United States.  There have been hints that that could happen, references to an aunt in Michigan who might find a way to bring her there, and then all at once it happens.  The chaos of the new environment is suggested by the next chapter title: “Destroyedmichygen.” Since this is Detroit after the economic collapse, some of the bleakness from back at home in Zimbabwe appears to have replicated itself in Michigan.  Darling lives with her aunt Fostalina, her husband and their children, with a move to Kalamazoo following shortly.
It is in the America sections of Bulawayo’s novel that the writer reaches her stride and her intense focus.  The story is one of loss, what the immigrant has to give up in order to survive in the United States.  There have been hints of this earlier, plus a rather direct statement from the author on the jacket of the book: “I am still shadowed by the sacrifices I made to get here.  The pain of adjustment not only made me smell my armpits and catch the fine whiff of my outsiderness, but also made me long for my country, even as President Mugabe was bringing Zimbabwe to its knees. Those of us who give up our homelands live with quiet knowledge nestled in our blood like an incurable disease; even as we are here, we are tied to somewhere else.”
Darling misses her mother and the friends she played with in the street.  Phone calls are a constant reminder of the distance separating them.  But there is no cure for homesickness. The United States isn’t exactly welcoming; she’s aware of her second-class status. From every direction, she’s bombarded by American consumerism and pop culture. In a Best Buy she picks up a DVD of Angelina Jolie, and she reflects that “she can go anywhere in the world and get a baby wherever she wants. When I saw that she got that pretty little girl from Ethiopia, I was jealous; I wished she had come to my country when I was little and got me too. I could be Darling Jolie-Pitt right now and living in a mansion and flying around in jets and everything.”
Finally, the novel becomes a profound commentary on the situation of all illegals in the United States, many of them trapped in situations where their visas have expired. They are unable to go home because, if they do, they won’t be able to gain re-entry to the United States.  In America, many illegals stick to themselves, without assimilating, because they are so afraid of being discovered. They live in the cracks. Their jobs are not only the worst ones – but those that are the most dangerous. She lists the terrible work-related accidents of a number of her friends and her own lowly jobs.  And for sickness, “We got sick but did not go to hospitals, could not go to hospitals. We swallowed every pain like a bitter pill, drank every fear like a love potion, and we worked and worked.”
Perhaps worst of all, when their parents or members of their families back at home die, they can’t be present at the funerals.  Finally, there are no reasons to return home. They have been here too long. The limbo here in America will last forever. Besides, their children born here in the United States have new names – Western ones. No more wonderful names like NoViolet or MoreBlessing.
The ending is as powerful as the earlier segue to the immigrant’s trappings here in the United States.  NoViolet’s We Need New Names slaps us in the face.  New names rarely evolve without a painful period of no names.