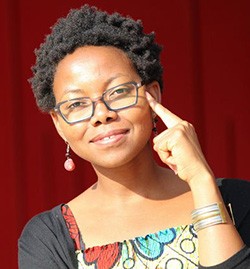 ZIMBABWE born NoViolet Bulawayo is promoted by her publishers as a “superstar author”, one whose first novel, We Need New Names, was shortlisted for the 2013 Man Booker Prize. She’s the first black African woman and first Zimbabwean to receive this accolade.
NoViolet moved to the US at age 18 and received the prestigious Truman Capote Fellowship at Cornell University. She is now a fellow at Stanford University.  Bulawayo will be a guest at the WORD 2014 Writers and Readers Festival in New Zealand later this month.
In an interview ahead of the visit, she speaks about her pen name as well as her first novel …
Tell us about your story-writing background – when did you begin writing stories and when did you realise you wanted to make writing your career?
My journey starts with hearing stories told mostly by my grandmother and father throughout my childhood; my interest was sparked there. I got into serious writing in college, and it was enough to convince me to stick with it and eventually ditch my law school aspirations for writing.
Why did you decide to write under a pen name?
I wanted a name that spoke and meant something to me so I chose one that allowed me to celebrate my late mother as well as my hometown – both are very dear to me, and I consider it more than a pen name.
Your father was a police officer so presumably you did not grow up in a shantytown. But you did move to America, joining an aunt there as Darling did. How much of her experience is your own?
I definitely didn’t grow up in a shanty town and had a normal childhood, very far removed from Darling who grows up when the country is coming undone. Our childhoods don’t have much in common except for the games, and maybe a little of the attitude. It’s when she moves to the US that our narratives start to intersect as we’ve both been immigrants in the new country, and there are times I allowed her to borrow from my own experience.
Many readers will find what the shantytown children endure shocking – an 11-year-old girl pregnant to her grandfather, children starving, an immense divide between rich and poor. Was this intended as a wake-up call?
Not so much a wake-up call because this is the reality of our world if one cares to open their eyes; there have always been people living under pressure, living difficult lives, and of course I am moved by the plight of children everywhere because they are the most powerless of victims. My focus was simply to join other socially-engaged artists in holding a mirror to our problematic existence.Advertisement

The children we meet in your book have names that seem unusual to us in the West: Bastard, Darling, Godknows, Bornfree – what is the significance of names in We Need New Names?
I come from a place of colourful names so I wanted to capture that in my work, after all the novel is many things including a celebration of my culture. Beyond that, they form a script of their own; they help illuminate character and tell stories.
You have had exciting success and critical acclaim for your first novel. What pressure does this place you under – how do you match this with your second novel?
I suppose the pressure is in that a lot of people may be waiting to see what I do next, which definitely was not the case when I was writing Names, I mean nobody cared what I was doing, nobody was waiting and that was nice. Still, pressure or no pressure, I’d want to always do my best – on the next novel and the next and the next, otherwise there’s no point.
NoViolet Bulawayo will be a guest at the WORD 2014 Writers and Readers Festival. She will appear at The Stars Are Out Tonight, Friday, August 29, 7.30pm, and We Need New Names, Saturday, August 30, 2pm. See wordchristchurch.co.nz.