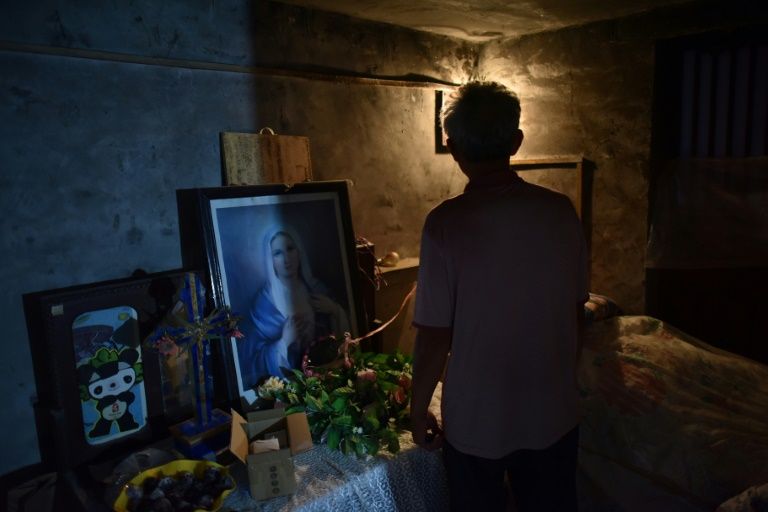 A government sign outside a Catholic church in central China warns that children are not allowed to attend mass. “Illegal” churches are being bulldozed. Priests are handing over personal information about their flocks to authorities.

Roman Catholics in Henan province are running out of space to worship as the atheist Communist government steps up a campaign to “Sinicize” religions and demolishes old neighbourhoods to make way for development projects.

The campaign has intensified even as the Vatican and Beijing, which severed ties in 1951, are reportedly close to resolving a longstanding dispute over who gets to appoint bishops.

The standoff has split China’s roughly 12 million Catholics between those who follow government-approved prelates and those in “underground” pro-Rome churches.

A tattered poster of Jesus and a few wooden pews beneath bricks and broken planks are the only evidence that a church once stood in Puyang city before it was deemed an “illegal construction”.

Liu Xueshang, a weathered old farmer who spent his life savings to help build it, searched fruitlessly through the fallen branches of the church’s crushed pomegranate trees for its cross.

“The church here is now facing a terrible future. We have nowhere to worship and don’t know what we’ll do,” said Liu.

Churches have been required to display the national flag and constitution but take down religious imagery from public-facing spaces.

In recent months, minors, college students and even infants have been barred from entering all church premises.

On a recent Sunday at the officially-sanctioned Cathedral of the Sacred Heart in Anyang, an official from the State Administration for Religious Affairs said she came to “inspect” as 800 people attended mass.

“Catholicism is not native to China,” she said.

And in Zhifang village south of Puyang, authorities welded shut the entrance of a kindergarten in a church’s courtyard.

The school was shuttered because “they want to prevent any cases of the church being involved in education”, said a village leader who declined to give his name.

Churches have also been told to hand over detailed information about each of their members, including their finances and ties to “foreign influences”, according to paperwork seen by AFP.

One senior priest who requested anonymity said the data would be used to set up an online religious management system and monitoring app.

Divulging the personal details of churchgoers has been “a huge emotional burden on our clergy, who see it as a sin,” he said, stating that guilt-ridden priests have come to him in tears.

Most of the new measures were developed to rein in Protestantism, which authorities believe has been growing “too quickly” in Henan, he cited officials as saying, although Catholics are finding themselves targets too.

Many Catholics in Henan, in eastern China, are paying close attention to the negotiations between Beijing and the Vatican.

“We hope the religion problems can be solved, we have the same faith, we want stability, we want to unite,” an underground church member said.

Vatican spokesman Greg Burke said in a brief statement to AFP that “the dialogue between the Holy See and the People’s Republic of China continues”.

The Henan and national religious affairs bureaus did not answer requests for comment.

The crackdown in the province is amplified by the razing of old districts where most churches are located to make way for development projects.

The rubble of the Puyang church lies in a construction site for high-rise apartments.

The decades-old church was built with official permission and had a license to operate, but authorities abruptly declared it illegal a few months ago, said Liu, the farmer and local village leader.

Without warning, bulldozers tore it down one night.

“The next day, all the old church members came and sat here, weeping,” he said.

A meagre compensation was not enough to secure a new place.

Desperate underground priests have approached state-sanctioned colleagues for help to secure a place of worship in exchange for nominal oversight.

A state-approved priest said the urbanisation and demolitions mean “the space in which the underground can exist is getting smaller and smaller”.

“We’re speaking with the underground now — so as to protect them, not control them. This allows the government to know we’re monitoring them. This is our innovation in Henan.”

Many priests fear the restrictions will spread elsewhere in China.

“For many years, our feeling has been that Henan is an area of experimentation for the central government,” said a senior clergyman with close ties to the government.

“We think this is just the beginning.”