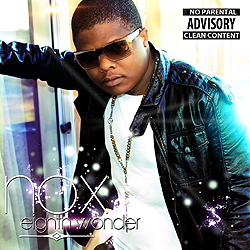 NOX Guni has released his long-awaited eighth album, 8th Wonder – and the star has offered the full album to fans as a free download online.
The new album was preceded by the release of three singles – Ndaita Mari, Kupenga Kuti Pee and Ndinovhaira Newe – which have all become hot commodities on the Zimbabwean charts.
To coincide with the album release, Nox dropped the video for Ndinovhaira – the stand-out track on the album.
Nox said: “I’ve put my heart and soul into this album. I look at it as my personal token of thanks to my fans, hence I’ve taken a hard decision to give it away free so everyone has a chance to own and enjoy it.”
The 30-year-old, real name Enock Guni, continues to take advantage of the marketing potential of the internet which has seen his popularity soar in the Zimbabwean Diaspora.
Howard Bhaude, the manager of Nox’s Ice & Roses studio said: “We have a market saturated with cheap pirates in our industry and we second Nox’s decision to take a quality product to the fans free of charge.”
NOX: NDINOVHAIRA