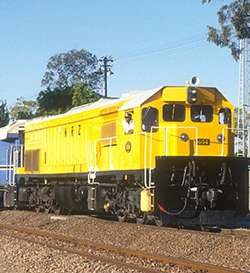 THE National Railways of Zimbabwe has secured a $460 million loan from the Development Bank of Southern Africa to rehabilitate its ailing infrastructure, with the deal expected to be announced next week, an official has said.
Transport secretary, Munesu Munodawafa told delegates at a workshop at the Mine Entra exhibition that the loan was crucial to the recovery of the parastatal.
NRZ requires in excess of $2 billion to fully capitalize after a decade of decay.
“If we sign the deal next Wednesday, we expect work to start in two and half months,” he said.
Munodawafa said the money will be used for basic infrastructural rehabilitation but will not include the re-electrification of the Dabuka- Harare line.
“It will basically be used to improve signals and rehabilitation of wagons.”
He said apart from the loan, the NRZ was also exploring various other funding options to breathe life into its moribund operations.
The perennial loss-maker, which is saddled with $144 million debt raked up since dollarization 2009, registered a $17 million deficit in the first five months of 2014, generating $44 million revenue against $61 million expenditure.
The NRZ is in dire need of fleet renewal, with most of its wagons being more than 40 years old and having gone beyond their lifespan.
The parastatal moved 3,6 million tonnes of goods in 2013, against a target of 6 million tonnes. In 1998, the NRZ moved 18 million tonnes.
The NRZ superintends about 3,000 kilometres of rail, with about a tenth of that under speed restriction due to the poor state of the infrastructure, while the electrified Gweru-Harare link has been decommissioned after vandalism and cable theft.
Munodawafa also revealed that the rehabilitation of the Plumtree to Mutare railway line was almost complete after the DBSA provided a loan.
“We expect to complete the project in December.”Advertisement