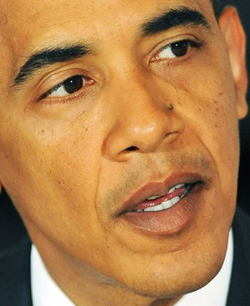 THE last time Iran invaded another nation was in 1738. The U.S. has engaged in over 50 military invasions and interventions since their independence in 1776.
The recent denuclearization deal is catastrophic for Iran, simply because it paves the way for yet another U.S. military intervention against Iran.
History proves that America conducts regime change in Middle Eastern nations, which refuse to obey Washington, using a three-tiered strategy: sanctions, denuclearization, and military intervention.
Iraq and Libya provide the most recent examples of nations that have signed nuclear disarmament deals with the West, only to then be invaded by the West.
In 1945, President Truman’s bombers dropped “Fat Man” and “Little Boy” on Hiroshima and Nagasaki, killing 140,000 people instantly. The gruesome images that emerged from the rubble forced U.S. leaders to devise a new, subtle weapon of mass destruction – economic sanctions.
The truth is that sanctions are far more deadly than nuclear weapons. The United Nations estimated that 220,000 men, women and children died as a result of the atomic bombs dropped in 1945 and their aftermath.
Used as a tool for the enforcement of political change, sanctions occur when one powerful government imposes economic suffering on a civilian population by withdrawing trade and financial relations.
The United Nations also estimates that 1.7 million Iraqis died due to sanctions, 500,000 of which were children. In 1996, a journalist asked former Secretary of State, Madeleine Albright, about these UN reports, specifically about the children. America’s top foreign policy official replied: “I think this is a very hard choice, but the price – we think the price is worth it.” The U.S. sanctions policy is nothing short of genocide.
In fact, the U.S.-led sanctions regime in Iraq killed more civilians than the entirety of chemical, biological, and nuclear weapons used in human history. America currently holds eighteen nations under sanctions, causing untold suffering for 428 million civilians.
They told us that Iraq was a terrorist state; Iraq was a nuclear threat; Iraq was tied to Al Qaeda. It all amounted to nothing.
From 1990 to 2003, Iraq suffered sanctions, the first stage of the West’s regime change strategy. After losing millions of lives and billions of dollars, Saddam Hussein’s resolve was broken and, in November 2002, he signed an agreement to accept United Nations nuclear inspectors and monitors. Advertisement

Saddam Hussein’s signature on the denuclearization deal paved the way for America’s military intervention in Iraq, and the rest is history.
All the while, history repeated itself in Libya. The West executed its triple-barreled regime change strategy of sanctions, denuclearization and invasion with ruthless efficiency.  Libya once had the materials needed to make nuclear bombs: centrifuges, weapons designs, and fissile material.
Gaddafi was seduced by the siren song of the West. Give up your weapons of mass destruction, they said, and we will welcome you into the international community.
Enticed with an end to sanctions it had endured since the 1980s, improved relations with the West, and a guarantee of security, Gaddafi ended his nuclear quest in 2003. Eight years later, his position was as far from secure as one could imagine.
President Clinton signed the now infamous Iran-Libya Sanctions Act. The Libyan people were unusually vulnerable to the effects of sanctions, because Libya imports 75% of its food and oil exports make up 95% of its revenue.
The United Nations Children’s Fund reported that these sanctions caused widespread suffering among civilians by “severely limiting supplies of fuel, access to cash, and the means of replenishing stocks of food and essential medications.” Clearly, U.S. sanctions are nothing short of a crime against humanity.
As president, Gaddafi’s number one responsibility was to protect the Libyan people, and in late 2003, when he signed a nuclear disarmament deal with America, he failed that task.
During NATO’s bombardment of Libya, a North Korean Foreign Ministry official stated that, “It has been shown to the corners of the earth that Libya’s giving up its nuclear arms…was used as an invasion tactic to disarm the country”.
If the Libyan regime wanted to ensure its own survival, then, just like North Korea, it should have developed a nuclear deterrent.
When regime survival is in question, conventional weapons are unreliable deterrents. Nuclear weapons never fail to dissuade other nations. Historically, the strong always deter the strong; the United States and Soviet Union did so for decades. But, the weak can also deter the strong. This played a large role in why the U.S. was so eager to disarm Saddam in 2002 and Gaddafi in 2003. This also explains why it is imperative that Iran must not agree to disarm.
The most recent Intelligence Report published in 2012, endorsed by all 16 U.S. intelligence agencies, confirms that Iran ended its nuclear weapons program in 2003. Truth is, any Iranian nuclear ambition, real or imagined, is as a result of American hostility towards Iran, and not the other way around.
Much like Iraq’s “weapons of mass destruction”, the U.S. has used the imaginary nuclear threat to enforce sanctions upon the people of Iran. The West has executed its first stage of the regime change agenda in Iran since 1979. They have cost Iran $120 billion in lost revenue since 2010; and, they even include a ban on the importation of certain medicines and foodstuffs.
Mass human suffering caused by sanctions on Muslim countries is an essential part of their design. Senior U.S. politician, Brad Sherman, remarked, “critics of sanctions argue that these measures will hurt the Iranian people. Quite frankly, we need to do just that.” In short, sanctions have succeeded in causing enough suffering for civilians to force their Iranian leadership to sign a suicidal deal with America.
As part of the latest denuclearization deal, America agreed to return the $42 billion dollar’s in ceased oil revenues, at a measly rate of $600 million per month. Clearly, Tehran got too little in exchange for its imminent demise.
The West’s success in the first two stages of regime change signals a final warning for Iran. History shows that, perhaps, it is only a matter of time before Iran reaches the last stage.
Not so long ago, Iraq and Libya were the two most modern and secular states in the Middle East and North Africa, with the highest regional standards of living. Nowadays, nuclear disarmament has allowed Western military intervention to turn Libya and Iran into two of the world’s most troubled nations.
In order to avoid this fate, Iran’s leadership should stand firm, refuse to re-engage the West on further denuclearization, and continue along the revolutionary road that that it charted in 1979. The old saying that, “power only yields to power”, is unfortunately true. A strong military is an oppressed nation’s only guarantee of peace from the war of the oppressor.
Garikai Chengu can be contacted at chengu@fas.harvard.edu