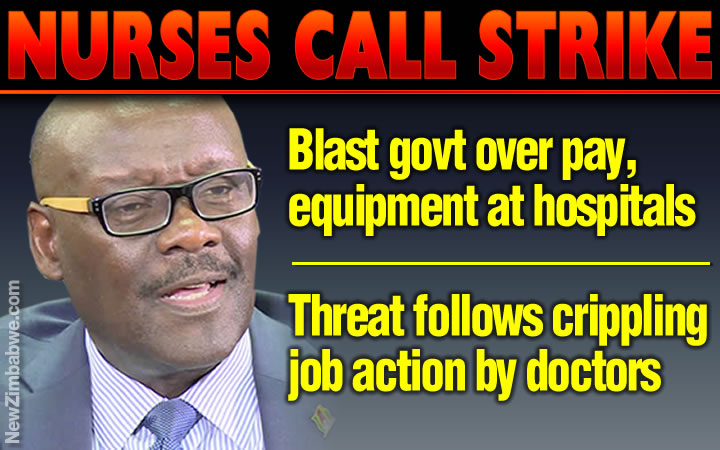 NURSES in public hospitals will down tools this Monday protesting government’s failure to uphold a collective bargaining agreement signed last month to quell another gruelling doctors’ strike which left patients stranded and some dead.

Health minister David Parirenyatwa has yet to respond to the development.

In a memo addressed to employers and managers of government hospitals dated 14 April, the Zimbabwe Nurses Association (ZNA) said its members would this time only return to work when their grievances were fully resolved.

“Nurses play a pivotal role in health delivery in Zimbabwe. They provide services to the community 24/7 with minimum resources and below market packages,” reads the memo.

“Regardless of this, government has seen it fit to ignore these combatants by not attending to issues which enhance their functionality and motivation (such as) insufficient medical, surgical, human resources and equipment at health facilities.

“Discrepancies in allocation of allowances should be rationalized immediately, non-implementation of outstanding issues like regrading, promotion procedures, since 2010 for nurses.”

After a few days of striking together with doctors, nurses went back to work following a compromise agreement with the employer last month.

However, doctors went on to strike for over three weeks demanding a better deal which government eventually conceded to.

The cash-desperate government appears to be failing to honour the agreements and seems to have chosen to sacrifice the “understanding nurses” while the uncompromising doctors went home smiling with the agreed $1,200 fixed on-call allowances

ZNA claims to have written to government this month to seek an explanation on why the employer defaulted on paying nurses allowances as agreed last month, but no success has been registered.

The threatened industrial action becomes the second president Emmerson Mnangagwa has had to deal with since taking office last November.