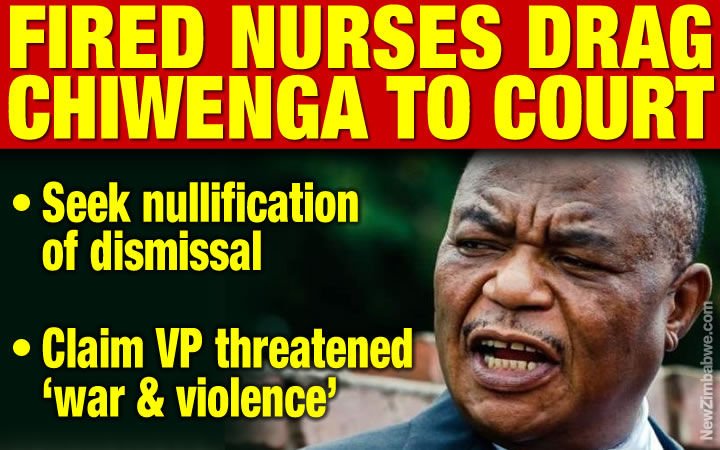 NURSES dismissed by the government last Tuesday for striking have accused Vice President Constantino Chiwenga of threatening them with “violence and war” before ejecting their leaders from a negotiation meeting.

This is according to an urgent High Court chamber application seeking an interdict to stop the Vice President from terminating nurses’ contracts and recruiting new nurses to replace them.

In an application filed Friday, the Zimbabwe Nurses Association also cited the Health Services Board, Health and Child Care Minister David Parirenyatwa, along with the Vice President, who signed the dismissal letter in his capacity as chairperson of the cabinet cluster on social services.

The nurses, in their application, argued that they were exercising their labour rights hence their purported summary dismissal was not justified, as their conduct was legal.

The government on Tuesday fired more than 16 000 nurses who had gone on strike against poor remuneration and ‘appalling’ working conditions.

On Tuesday, Chiwenga said the nurses had refused to go to back to work despite the government having agreed to pay them more than 17 million dollars in allowances after a series of meetings with the Health Services Board and the Zimbabwe Nurses Association.

However, the nurses, represented by Precious Chakasikwa and Bernard Chidziva of Kantor and Immerman Legal Practitioners, argued that there was no justification for anyone to terminate their contracts of employment as they had embarked on a lawful collective job action.

They said Chiwenga had threatened their leadership with violence and war during a meeting and ejected the union’s president from the meeting.

The nurses want the High Court to restrain and interdict the HSB, Parirenyatwa and Chiwenga from terminating their services at state-run hospitals; and in the event that the respondents proceed with the termination of the employment contracts, the termination be declared null and void.

They also want the High Court to stop the respondents from recruiting new staff to replace them.