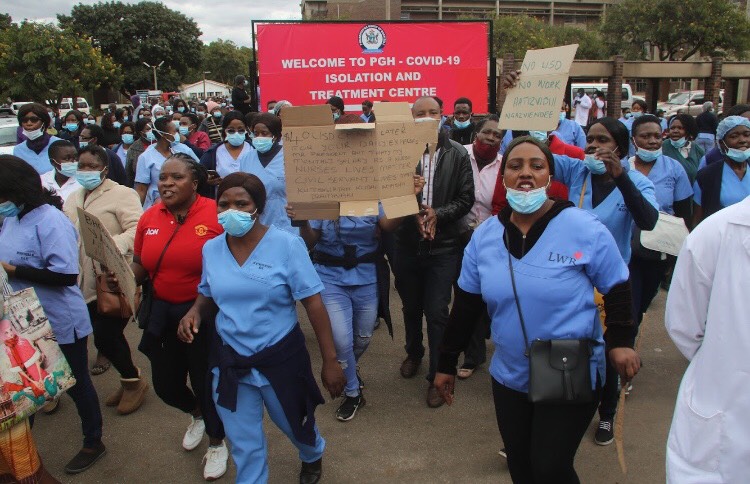 NURSES have threatened to join teachers who have been on strike for the past five days, indicating the education sectors’ plight was similar to theirs.

In a statement of solidarity, bashing government’s  decision to suspend teachers who went on industrial action, the Zimbabwe Nurses Association (ZINA) warned the decision could have ripple effects.

Government Thursday issued a statement suspending all teachers who failed to report for duty when schools were opened.

“Instead of instituting dialogue, the Ministry acted in a manner that is not only insensitive to teachers but in any event unlawful as the suspension has no basis in law,” the statement reads.

“The plight of teachers is the plight of every member in the civil service. It is no secret that the ordinary cost of living has gone up significantly and the cost are now pegged in United States Dollars.

“Accordingly, the attitude taken by government in response to such genuine concerns is, in our view, representative of the attitude it views the plight of all public employees,” further reads the statement.

Teachers have vowed not to return work until their demands were met.

The recent 20% local currency salary increment and US$100 incentive addition have not charmed teachers who are calling for an unconditional restoration of their US$540 salary as at October 2018.

Nurses have also been up in arms with government for the same reasons.

In 2018 Vice President Constantino Chiwenga who doubles as the health minister fired nurses for striking and then forced them to reapply for their jobs.