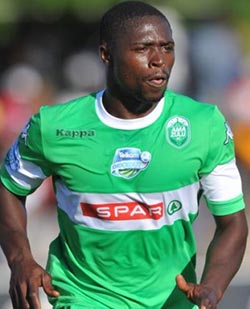 SOUTH African premiership side AmaZulu’s captain, Carlington Nyadombo, believes they “always had it within” them, following a spirited fight-back against Bloemfontein Celtic over the weekend.
Usuthu came back from being two goals down to win the Telkom Knockout quarter-final clash 3-2, in the absence of head coach Craig Rosslee, who was asked to step aside for the match.
Assistant coach Wilfred Mugeyi was in charge of the side when they registered their first win of the campaign, and Nyadombo said it felt they had won the competition.
“It felt like we had just won the actual cup,” the Zimbabwe international said.
“It was one of our best games this season and maybe doing it without the coach there showed that we have always had it within us.”
He added that he was unsure of who would lead Usuthu when they face Chippa United on October 18 when league actions resumes after the international break.
“I don’t know anything at the moment, but we are still hoping we can have him around to be our head coach,” the Usuthu skipper explained.
“However, it is not my position to decide what happens with the coach because as a player I have to support whatever stance the management takes.”