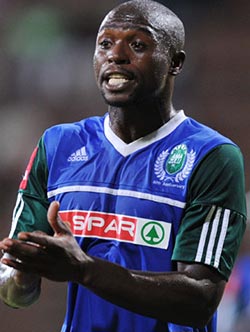 AMAZULU and Zimbabwe defender Carlington Nyadombo has spoken exclusively to Goal about the rumours of him joining Orlando Pirates.
Nyadombo recently returned from Tanzania after his national team Zimbabwe drew 0-0 away, and he’s been linked with a move from Usuthu to Pirates.
“I have not had any offer from Orlando Pirates and this is all news to me. Yes, I heard about it from one of my teammates, but I cannot say anything about it, because I have not heard anything from my agent,” said Nyadombo.
The defender said that at the moment, he wouldn’t like to raise his hopes without an official approach.
“I don’t like to raise my hopes up, and by the way things are going, I doubt AmaZulu would let me go that easy, because of the relationship I have with them. I have grown a lot at AmaZulu, I must say that I am still enjoying my stay there.
“I think the club also values the work that I put in and the relationship is just great. Having said so, when the offer comes, I will have to look at it and decide,” he said.