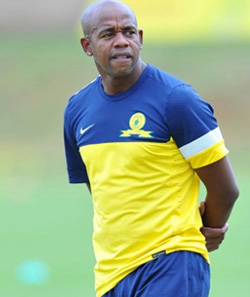 FORMER Zimbabwe and Mamelodi Sundowns midfielder Esrom Nyandoro is adamant that his countrymen still have enough in the tank to force their way out of the Group of Death after letting Algeria off the hook in their opening African Nations Cup match in Gabon on Sunday.
The Warriors were just eight minutes away from claiming a 2-1 victory over Algeria before Leicester City forward and CAF’s Player of the Year Riyad Mahrez scored his second goal of the night to earn a point for the North Africans in a pulsating 2-2 draw.
Zimbabwe now face the highest ranked African team in FIFA’s world rankings‚ 33rd-ranked Senegal‚ in their next assignment on Thursday and Nyandoro said Southern Africa’s lone representatives in Gabon have nothing to fear.
‘‘If they can perform for a full 90 minutes the way they did in the first half against Algeria‚ they can beat Senegal‚” Nyandoro said.
Senegal beat Tunisia 2-0 in their opening match and will have taken note of the threat posed by the likes of Khama Billiat‚ who was unlucky not to score a goal on Sunday.
Zimbabwe’s last appearance on the continent’s grandest football stage was in 2006 in Angola and many of those who gazed into their crystal balls before start of the showpiece would have predicted an early exit for the Warriors after they were drawn in a group that includes heavyweights Senegal‚ Algeria and Tunisia.
But such was their performance‚ especially in the first half‚ against the tricky Algerians that few will argue against Nyandoro’s assertion that captain Willard Katsande’s players will emerge from Group B.
Nyandoro said Zimbabwe should have won the match and will look back on the result as a missed opportunity after allowing the Algerians back into the game.
Mahrez had given Algeria the lead early in the game but a Kudakwashe Mahachi equaliser and a converted penalty by Nyasha Mushekwi gave the Warriors an unexpected lead in the first half.
The troublesome Mahrez would return later in the game to deny the Southern Africans what would have been a famous victory.
‘‘The Zimbabwe in the first half and the Zimbabwe in the second half were totally different‚” Nyandoro said.
‘‘I do not know what happened in the second half. I am a little bit disappointed about the performance in the second half and I consider it as two points dropped. We could have won that game!”Advertisement

Zimbabwe’s performance will have taken many by surprise as their preparations were rocked by a player strike over unpaid wages and bonuses that threatened to disrupt the team even before they had kicked the first ball in Gabon.
But the dispute didn’t seem to bother the team very much‚ as their brave performance against one of the toughest teams in the tournament suggested.
All eyes‚ especially in South Africa‚ are now on their assignment against the equally tricky Senegalese on Thursday