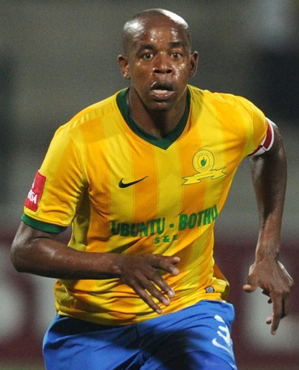 ESROM Nyandoro, the former Warriors and Mamelodi Sundowns skipper, has been appointed the assistant coach at the South African side.
This comes after 11 years of service at the club he joined from former Zimbabwe champions AmaZulu in 2004 when he won the Jet Rookie of the Year award.
Nyandoro has been rewarded for his loyalty and behaviour on and off the field of play with a coaching role in the MultiChoice Diski Challenge team.
He will assist head coach David Notoane and comes in as a replacement for Alex ‘Barnes’ Bapela.
Aged 35, Yellow, as he is affectionately known, played 203 games for billionaire Patrice Motsepe’s side
He was spotted at the Peter Ndlovu Under-19 tournament in Bulawayo while playing for Zimbabwe Saints before moving to AmaZulu, where he won the league title in 2003.
Ndlovu is the team manager for Sundowns’ senior team.
Compatriots Cuthbert Malajila and Khama Billiat play for Sundowns while Kuda Mahachi has been loaned out to Lamontville Golden Arrows in Durban.
In 2006, Nyandoro went for trials at then English Premiership side Sheffield United at the recommendation of their former player Ndlovu, but was not signed.
The Sundowns man scored the goal of the tournament when Zimbabwe lost 5-3 to Cameroon in the 2004 Africa Cup of Nations in Tunisia which was the Warriors debut appearance.
Nyandoro becomes one of the few coaches from Zimbabwe in South Africa with former Highlanders coach Roy Barreto taking the honours after having won a league title with giants Orlando Pirates in the 90s.
Ex-Dynamos and Warriors coach, Sunday Chidzambwa took Black Leopards from Division into the top flight league while Sheperd Murape has been hopping from team-to-team until he eventually landed in Namibia.
Former Warriors striker and coach, Ian Gorowa once took charge of Sundowns, Ajax Cape Town and is now at relegated Division One side Moroka Swallows.
Wilfred Mugeyi was coach at AmaZulu while his brother William was at then Umtata Bush Bucks.Advertisement