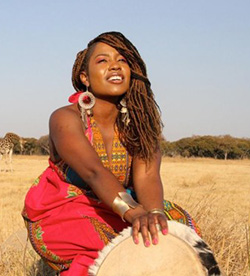 THE Miss World Zimbabwe UK beauty pageant is fast approaching, with this year’s event being hosted by singer, Tytan and businesswoman, Olinda Chapel.
The 2017 finalists were announced mid-June and include; Karen Kawadza, Natasha Gweza, Nyaradzo Mawando, Khethiwe Ncube, Amanda Nkomo, Tanaka Muwalo, Tafadzwa Mazanhanga and Laurah Simbi.
Musician, Adrian Tate is also scheduled to perform at the pageant. The former Soul Afrika group member, who recently released his EP alongside Tytan, has dubbed it as his comeback.
Meanwhile, songstress Cynthia Mare has also joined the stellar line-up of guest performers.
The artist, who is currently in the UK, said she is excited to be performing at the pageant and looking forward to entertaining guests on the night.
Organisers have also announced that popular DJ, King Alfred will also be at the event and will be keeping guests entertained in between and, after the event.
The panel of Judges have been announced and include, PR Executive Gordon Flynn, former Miss Zimbabwe, Karen Stally and TV personality Bren Mupa.
Fashion designer Rahima Mohammed and Panache Parties director, Tau Musarurwa complete the panel for Saturday.
The pageant is being held at the prestigious De Vere Grand Connaught rooms in London.
The event is planned to start at 7pm. Limited tickets are still available, with standard tickets available for £35. VIP tickets, which will guarantee guests front row seats, as well as a meal are available for £60 and can be purchased from the website at http://zimbabwefashionshowcase.com/miss-world-zim-uk/
This year’s pageant has been proudly sponsored by Senditoo, Exodus Law Associates, Raaah’s evening wear, FOSTA, Elegance Fashions and Diva Hot Spot.
Miss World Zimbabwe Finalists: