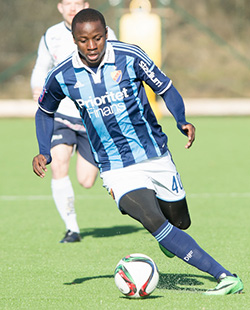 ZIMBABWE striker Nyasha Mushekwi has signed a short-term deal with Swedish top flight side Djurgården
Djurgården confirmed the deal Tuesday ahead of the closure of the Swedish transfer window on Wednesday.
Mushekwi, who is still on the books of South African side Mamelodi Sundowns, had been training with the Swedish side for several weeks as he looked to end his nightmare with the Brazilians.
The 27-year-old has not played for Sundowns for about two years.
Djurgården sports director Bosse Andersson said the Warriors striker had signed a contract which runs until mid-August.
“Everything is ready. Contract has been signed by both parties,” said Andersson.
“We are now just waiting for the South African Football Association to approve the transfer.
“We need (Mushekwi because we) have had some injuries to some of our strikers.
“He is an educated and intelligent player who will broaden our options upfront as well as increase competition in the squad.”
At Djurgården, Mushekwi will face competition from Gambia-born Amadou Jawo, Swedish Sebastian Andersson and Liberian, Sam Johnson, for a place in the starting eleven.
The Warriors forward has previously played for Belgian side KV Oostende.Advertisement