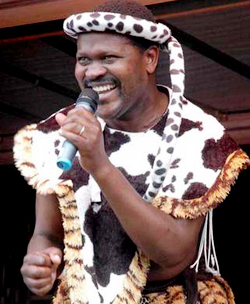 ROOFTOP promotions’ brand Wene Music Awards, which was officially launched at the beginning of this month, has announced its board of adjudicators who were appointed “based on their extemporary personal and collective governance standards”.
Announcing the adjudicators, the chairperson of the board, Paul Brickhill, said it was their desire to celebrate Zimbabwean music by placing Wene Music Awards among the highest honours a music practitioner could ever achieve.
“Awards are different the world over and have their own principles and processes,” he said.
“As far as the panel of adjudicators is concerned, Wene Awards judging principles have been largely determined which now serve as the basis for good governance practice.
“From here there is a tremendous task to determine all processes in accordance with these principles,” he said.
The adjudicators include Albert Nyathi, an arts development practitioner and pan-Africanist, who has championed community cultural development and inclusiveness of Zimbabwean cultures at home and abroad, winning accolades and distinctions over 20 years in music, arts activism and poetry.
He is joined by Fred Zindi, a Professor of educational psychology, award-winning academic author, lecturer and a trained musician.
Zindi founded and managed The Frontline Kids, and managed Transit Crew. He has written eight books on Zimbabwean music and numerous media articles.
Another member of the team is Debbie Metcalfe, one of Zimbabwe’s most prolific music managers, a passionate and energetic promoter of African music.
Metcalfe played a pivotal role in the post-independence period discovering, launching, recording and promoting a new generation of Zimbabwean stars including some of the biggest names to emerge over that period.
Another woman on the panel is Joyce Njeje Makwenda, an internationally acclaimed and award-winning writer, researcher and Zimbabwe’s foremost urban music history expert.
She has spent close to three decades undertaking ground-breaking research, compiling historic oral, written, audio and audio-visual documentation on the emergence of Zimbabwe’s formative urban music from the 1930s onwards, the early roots of Zimbabwe’s later explosion onto the world music.
Completing the panel is Nigel Munyati, a social entrepreneur and strategic management, communications and development specialist who has 25 years’ multicultural experience managing manufacturing, public sector investment and business development across Africa, the Middle East, Asia, Europe, USA, Australia and Latin America.Advertisement

Brickhill added that to avoid controversy, minutes of all the board’s meetings and resolutions of Adjudicators would be kept as a formal record of Adjudicator’s business. These may later be investigated and “audited” (as a systems and procedures audit concerning governance) at any time the Wene Award secretariat decides after each annual Award.
“Judging and decisions of the adjudicators’ panel is strictly and emphatically confidential during its process,” he said.
“Both to the Wene Award Secretariat or indeed any outside party, no influence of any nature will be allowed, nor any leak to the media or any other disclosure. Any attempt to influence the decisions of the adjudicators panel will be not be treated with “kid gloves.”
Presently, there are four types of awards categories, namely: recorded music, live music, lifetime achievement and various services to the music industry;
“Within these award types are the appropriate actual Wene Awards by genre; musicianship; contribution, collective, collaborative or solo efforts; and service sectors like production, management and music journalism,” added Brickhill.
All Awards presentations will be accompanied by scrupulous citation stating the reasons for the Award to exacting standards, and available immediately upon presentation to the media and public domain.
Brickhill has a 35-year professional association with Zimbabwean and pan-African arts, most prominently in music and books.
As a youngster he was active in the post-independence music scene, for three years with Solidarity Band that merged (with Biggie Tembo, Rise Kagona and others) into the Bhundu Boys. After a stint with Vadzimba, in 1995 he founded jazz and blues outfit Luck Street Blues and they had a successful 10-year performance career.
Beginning 1997, he founded Book Café, and its many development off-shoots including Pamberi Trust, which have collectively staged about 11,000 live performances and 200 tours.
ROOFTOP promotions launched its inaugural WENE Music Awards with the idea to at least take care of all music awards from different regions and cultures in the country and they want to encourage adjudicators to scan the entire country for such talent.
The WENE Music Awards will be held on the 29th October this year.