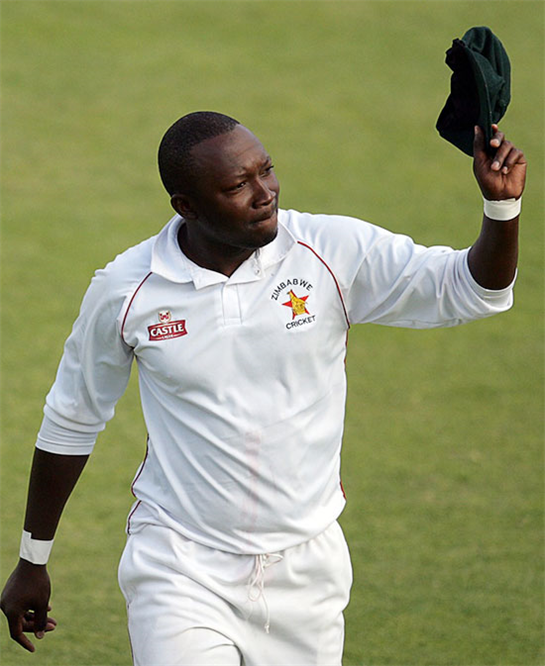 Zimbabwe 256 and 28 for 1 trail South Africa 397 (Du Plessis 98, de Kock 81, Nyumbu 5-157) by 113 runs
DEBUTANT off-spinner John Nyumbu took five wickets on Zimbabwe’s Heroes Day to limit South Africa’s first innings total but the hosts still face a tall order after the third day of the one-off test in Harare on Monday.
Zimbabwe reached 28 for one in their second innings, 113 runs behind South Africa’s first innings total of 397, which would have been much higher had it not been for Nyumbu.
As Zimbabwe celebrated their public holiday, the 29-year-old bowled with control and guile against the world’s number one test side to suggest the arrival of a national sporting hero.
His five for 157 was only the second time a Zimbabwean has taken five wickets on his debut. Andy Blignaut did the same against Bangladesh in 2001.
The home side will resume on the fourth day with Vusi Sibanda (eight) and nightwatchman Donald Tiripano (one) facing the tough assignment of setting South Africa a challenging total on a difficult batting wicket.
The wicket to fall in Zimbabwe’s second innings was that of Hamilton Masakadza (19), who fended a rising Morne Morkel delivery to AB de Villiers at second slip.
Earlier, Faf du Plessis fell two runs short of a century and Quinton de Kock notched up a patient 81 as the Proteas crawled to 397 from 158.3 overs in response to Zimbabwe’s first innings 256.
Proteas wicketkeeper De Kock reached his highest test score before he was the first test victim of Zimbabwe spinner Sean Williams, caught steering the ball to Sibanda at short mid-wicket.
If De Kock was disappointed at missing out on a hundred, du Plessis was seething as he fell two short, just before lunch.
Du Plessis had battled for 264 balls for his 98, but turned a delivery from Nyumbu into the hands of backward short-leg Regis Chakabva.
His dismissal ended a fifth-wicket stand of 119 with De Kock that lifted the Proteas after they had slipped to 157-4 on the second day.
JP Duminy was the last batsman out, caught by Brendan Taylor at slip for 55. This was cause for jubilant celebration by Nyumbu, who fell to his knees and lapped up the applause.Advertisement