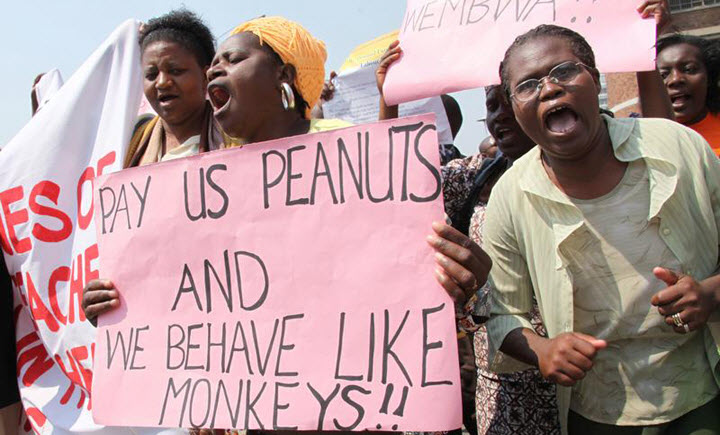 TEACHERS hired by the Zimbabwe School Examinations Council (ZIMSEC) to mark this year’s Ordinary and Advanced Level examinations in Bulawayo have abandoned the job over alleged irregular payments of allowances.

Speaking on condition of anonymity, markers who are based at Hillside Teachers College within the city, told NewZimbabwe.com that each one of them had been promised ZWL$20 000 by ZIMSEC but only amounts ranging from ZWL$7 000 to ZWL$9 000 were deposited into their bank accounts.

The markers said each one of them had been promised US$15.50 per day for 17 days, which is the duration of the marking period.

“But the money that reflected into those who have CBZ bank accounts was not what people expected,” said one of the teachers.

“Others who have different banks from CBZ are yet to be paid.”

The markers started work on March 6 after signing their contracts.

“This is money for transport, food and accommodation allowances as people are coming from different places.

“But when the monies started reflecting in our accounts, they were in RTGS and this is a far cry from what is expected,” said another marker.

When reached for comment, ZIMSEC spokesperson, Nicky Dlamini said the monies that were deposited into the markers’ bank accounts were part payments.

She said the remainder of money will be processed soon.

“They received part payment and not complete amount. This was not only in Bulawayo but the same in other places, even in Harare, they had the same issue.

“It was a part payment because this time we had a number of examination centres we had to handle but the rest of the money will be processed by end of this week and this was communicated to them.

“They didn’t stop working over this issue, but it was an issue the markers raised and they are working,” she said.

Grade Seven examinations markers have also complained over being short-changed by the examination body after their dues took time to reflect in their bank accounts.