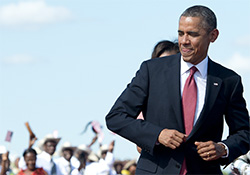 WASHINGTON: Kendrick Lamar’s “How Much a Dollar Cost” is tops in the White House.
President Barack Obama says the song by the Grammy-nominated rapper from Compton, California, is his favorite song of 2015.
In an interview with People magazine that was released Wednesday, Obama also shared his favorite book and movie of the year. They are “Fates and Furies,” a novel about a marriage by Lauren Groff, and “The Martian,” starring Matt Damon.
Groff seemed flabbergasted upon learning of Obama’s book selection.
“Never, even in my most grandiose dreams, did I think the president would read my book, let alone like it,” she said through her publisher, Riverhead Books. Groff’s book was a finalist for the National Book Award and has appeared on numerous lists of the year’s best books.
Obama’s wife, Michelle, revealed her picks, too, telling People that she can’t get enough of Bruno Mars’ song “Uptown Funk.” She and a troupe of dancers performed to the lively song earlier this year on “Ellen.”
For her favorite book, Mrs. Obama picked another marriage tome, “The Light of the World,” by family friend Elizabeth Alexander. It’s about the unexpected death of Alexander’s husband in 2012 and raising their two sons in the aftermath.
And for the first lady’s favorite movie? She chose “Inside Out,” an animated film led by comedian Amy Poehler.Advertisement