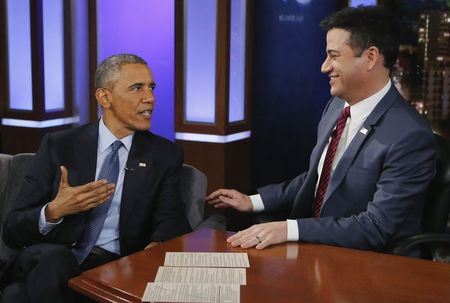 PRESIDENT Barack Obama doesn’t send text messages, rarely composes his own tweets, and isn’t allowed to have a smart phone that contains a recording device, he said on Thursday.
And don’t ask him for Hillary Clinton’s email address. He won’t give it to you.
“I do not physically tweet in general,” the president said in an interview on the ABC programme ‘Jimmy Kimmel Live’.
“I don’t text. I email. I still have a Blackberry,” he said.
Obama said his teenaged daughters had smart phones and exchanged text messages with their friends, but he was limited for security reasons from having the latest technology.
“I can’t use phones with recorders in them. So a lot of the new-fangled stuff, for security reasons, I don’t get,” he said.
In a reference to the email controversy that has dogged Obama’s former secretary of state, host Jimmy Kimmel asked the president if he had Clinton’s new email address.
“I can’t share it with you. I don’t think she’d want you to have it, frankly,” Obama deadpanned.
Clinton, the presumed frontrunner for the 2016 presidential nomination, has come under fire for using a private email account for official business during her time as the top U.S. diplomat.
Asked generally about life at the White House, Obama said it had been a long time since he had cooked anything or driven a car, and he made a joking reference to people who believed he was not born in the United States.
“In Kenya we drive on the other side” of the street, Obama said. The president was born in Hawaii to a mother from Kansas and a father from Kenya.Advertisement