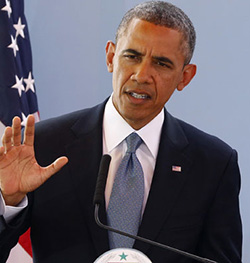 IN Kenya, they’ve dubbed it ‘Obamacare’: potholes filled, new pavements and overnight flower beds, as Nairobi is spruced up for the capital’s most awaited visitor, US President Barack Obama.
For the past month, hundreds of people have been employed to tidy the main highway from the airport to the city centre, often resulting in major traffic jams due to the road repairs.
“If traffic is bad now with this ‘Obamacare’, imagine what it will be when he actually comes,” said taxi driver John Kemboi, his engine switched off as he waited in stationary traffic, bad even for the notoriously slow roads of the capital Nairobi.
“And won’t Obama simply take a helicopter anyway?” he added, laughing at workers repainting faded road markings and laying new pavements on once muddy sidewalks.
Those working — sweeping the streets, cleaning the litter — are paid 400 shillings (around four dollars, 3.5 euros) a day.
“They are doing maintenance works like weeding, grass cutting,” said city council official Leah Oyake.
“It is not enough, but we have nothing else to do,” said 19-year old Jeremiah Wekesa, grumbling at his salary, but adding he is excited at the visit. “I am happy, it is good that Obama is coming. He’s a Kenyan and it has been a long time.”
Obama’s visit next weekend will be his fourth to Africa since becoming US president, but his first to Kenya, his father’s birthplace, since taking office in 2009.
But while celebrated as a hero throughout the country, many Kenyans have been disappointed it has taken him until almost the end of his second term in office to make the trip.
A presidential visit to Kenya had been put on ice while President Uhuru Kenyatta faced charges of crimes against humanity for his role in 2007-2008 post-election violence.
The International Criminal Court has since suspended that prosecution, citing a lack of evidence and Kenya’s failure to cooperate, not to mention allegations of bribery and witness intimidation.
Street children not happy
But some are frustrated it has taken a visiting president to make the improvements.
“One wonders why it takes a distinguished guest to beautify the city,” said taxi driver Douglas Mwangi.
The local council says it is splashing out some $440,000, but critics say the makeover is limited to a few official buildings and the routes taken by the US president’s convoy.Advertisement

The council insist the improvements are more than just for Obama.
“Nairobi is an economic hub in the region, and these improvements such as street lighting and cleaning of the city, will benefit all residents of the city,” added Oyake.
Others are not so pleased, especially the street children being forced out from central areas.
“Everyday we get arrested,” said Moses, a 16-year old who lives on the streets and sniffs glue.
“Before, we could enter the town but now it’s too risky for us. We are begging for money when the cars are stopped in the traffic.”
Excitement is growing. Kenya’s Luo people — the tribe of Obama’s father, who come from the western region towards the border with Uganda — are particularly proud, holding a recent celebration of music and dancing, dubbed the Luo Obama Festival.
“His father was a Kenyan – not only a Kenyan but a Luo by tribe,” said businessman Jonathan Mweke.
“We are happy, we are proud… he will be one of us.”
In Nairobi, actors are rehearsing a musical stage version of Obama’s autobiography, Dreams from My Father.
“This is a very important moment that we must capture as artists,” said director George Orido.
“Music is a universal language so those who want to understand who Obama is, this big visitor who everyone is talking about… they can come and watch our play.”