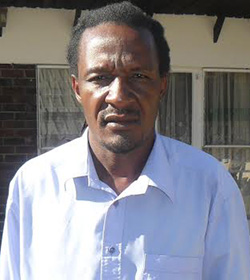 HARDLY known by most people, Kadoma Hotel and Conference Centre (KHCC) resident band, The Occassions Band has however been blazing a trail in the city.
The five-member group which is now the talk in the mining city plays an assortment of music which includes Jazz, dinner music and sungura.
Polished vocals and well-arranged instruments bore testimony to the creativity of this youthful outfit led by Ruben Ngweshero.
“I have assembled local youths to revive The Occasions Band which was formed by the then Kadoma Ranch hotel staff in 1987.
“Most of the founders of the band whom I played with when I was young have all died,” said Ngweshero in an interview with New Zimbabwe.Com.
Ngweshero, who plays keyboard, started his musical career in 1987 with the Horns of Africa in Masvingo before joining The Occasions Band.
“At Horn of Africa, I played with late veteran musicians such as Fanuel Kwesu and Stevie Muchemwa. These guys taught me a lot in music and inspired me to continue pursuing my musical career,” said Ngweshero.
The group which comprises Shamiso Joe, (female vocalist) Edie Zarimba (bass guitarist) Obert Mashipe (drums) and Praise Pfumai (lead guitarist) will be going into the studios to record their first CD, Muchanyara Chete, before embarking on a countrywide tour.
“We are currently putting some final touches on our new album which we are going to record with Metro Sounds in Harare. We have taken our time to prepare for this album,” said Ngweshero.
New Zimbabwe.com last week had the opportunity of sampling some of the songs on the new album during the band’s live performance in the city.
The album is certainly going to turn Sungura gurus like Alexio Macheso green with envy.
Some of the likely hits on the seven track album include Demo, Makanditeya and the title track Muchanyara Chete.
Regarding the band‘s future in the music industry, Ngweshero said: “I cannot determine the future of the band but the people whom we sing for will give us the appropriate ranking and, thus, our future will be determined.”Advertisement