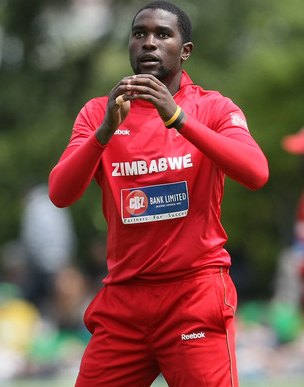 Bangladesh 251 for 7 (Anamul 80, Tamim 76, Kamungozi 2-38) beat Zimbabwe 183 (Mire 50, Sunny 4-29) by 68 run
LEFT-ARM spinner Arafat Sunny claimed his career best 4-29 to spin Bangladesh to a 68-run win over Zimbabwe in the second one-day international on Sunday.
Captain Mashrafe Bin Mortaza chipped in with 3-34 as Zimbabwe was bowled out for 183 in pursuit of Bangladesh’s 251-7.
Solomon Mire, playing only his second ODI, was the top scorer with 50. Skipper Elton Chigumbura made 38 and Regis Chakabva contributed 32.
Mortaza cowed Zimbabwe with a combination of pace and accurate line and length right from the start as he rocked the top order, leaving Zimbabwe 3-40.
He removed in-form batsman Hamilton Masakadza on naught in the first over with a slower ball and then followed it up with the wickets of Vusi Sibanda (21) and Sikandar Raza (16).
“It was 100 per cent professional. We didn’t bat well in the end but the score was good enough,” said Mortaza who was named man of the match.
“We started well with the ball and the spinners as usual bowled well. We lost our momentum after the opening stand but we still ended up with a good total.”
Arafat Sunny then dealt the touring side a major blow when he dismissed Brendan Taylor (8) to leave the side on a precarious 4-50.
Solomon Mire and Regis Chakabva resisted and put up 65 runs for the fifth wicket to give the side a ray of hope but Shakib Al Hasan removed him in the first over of the last powerplay just after he got his maiden half-century.
Mire hit just two fours in his patient 79-ball knock.
Al-Amin Hossain lured Chakabva with a slower delivery while Chigumbura was run out as Bangladesh squeezed closer to victory.
Sunny then cleaned up the tail, taking three wickets in five balls to wrap up the Zimbabwe innings and give Bangladesh 2-0 lead in the five-match series.
“I thought towards the end of the innings we brought it back by taking those wickets and gave ourselves a good chance of chasing it,” Elton Chigumbura said.
“I was happy with the first half but the second half was disappointing, especially losing those three wickets in the first few overs.”
“Happy for (Mire) that he scored his maiden fifty. He’s a good young player. If we could have batted 50 overs, these two games we could have chased down these scores. Unfortunately we are still making the same mistakes.”Advertisement

Left arm spinner Shakib Al Hasan (1-18) and fast bowler Al-Amin Hossain (1-44) picked up one wicket apiece.
Openers Anamul Haque and Tamim Iqbal both struck half-centuries to steer Bangladesh to a challenging total after the hosts elected to bat first.
Haque was the top scorer with 80 and Iqbal hit 76. They shared 158 runs for the opening stand after Bangladesh elected to bat first, in the second-best opening partnership after Mehrab Hossain and Shahriar Hossain put up 170 against the same opponents in 1999.
The other Bangladesh batsmen could not capitalize on the strong start as Zimbabwe made regular inroads to keep the hosts at bay.
Mominul Haque was the other notable contributor with 33 not out. Mushfiqur Rahim made 27. Iqbal was run out after hitting seven fours and one six in his 27th fifty.
Medium fast bowler Vusi Sibanda, who came in to bowl for the first time since 2011, helped Zimbabwe make a perfect comeback in dismissing Shakib Al Hasan on naught to leave Bangladesh on 158-2.
Shakib single-handedly sank Zimbabwe in the first match when smashing a century in a four-wicket haul.
Fast bowler Tinashe Panyangara then dealt the hosts a double blow in removing Anamul Haque and Sabbir Rahman (0) in three balls.
As Mushfiqur Rahim and Mahmudullah (12) appeared to be getting comfortable, leg-spinner Tafadzwa Kamungozi stepped up and removed both in consecutive deliveries.
Mominul Haque then hit some lusty blows to help the side propel past the 250-run mark. Haque hit three fours in his 33 off 23.
Tafadza Kamungozi (2-38) and Tinashe Panyangara (2-51) claimed two wickets apiece. Fast bowler Tenda Chatara and Vusi sibanda picked up one.