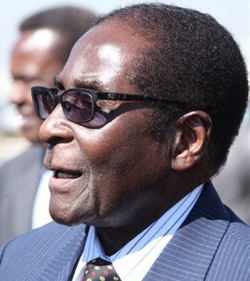 THE private media in general, and Daily News in particular which has become the opposition political parties’ and regime change proponents’ fifth column, never cease to amaze, especially when attempts are made to portray Zanu PF as a party on the precipice of oblivion when, in fact, the opposite is true.
In an article authored by one Gift Phiri, whose reputation derives less from his writing prowess than spewing anti-Zanu PF and First Family diatribe, the Daily News recently alleged that President Robert Mugabe was being confronted by a so-called whispering crusade within Zanu PF that was engineered by those vying to succeed him.
No impertinence intended to Gift, but one cannot behave like an adrenalin-frenzy bull in an oriental shop without risking castration. Puzzling, however, is the deafening silence of the paper to point out that President Mugabe has just emerged, fresh as an embryo, from a recent endorsement by multitudes that held a solidarity march during the Million Man March in Harare recently.
The issue of alleged faltering loyalty does not even arise, except in the fertile imagination of those with too much time on their hands and nothing else to do other than wish away their adversaries. Fortunately, President Mugabe is a reality and cannot be wished away by a handful of haters and political activists masquerading as scribes.
It is clear that the concocted daggers and the attendant Ides of March are part of a fervent agenda-setting thrust by the private media which has come to define the incestuous relationship between this part of the Fourth Estate and the opposition in the country.
Granted, Zanu PF is a newsworthy institution and many an editor owes their livelihood to diaries generated by the Party. Still, one cannot help but notice a trend where doomsayers attempt to link any non-event elsewhere to the revolutionary party.
Take for instance the issue of factionalism and succession within Zanu PF that the private media has sought to cultivate and widen in an attempt to destroy the Party from within. The tired headlines about VP Mnangagwa being poised to take over as well as the trivialisation of national politics along tribal lines is a detractor strategy that is meant to facilitate social disintegration and overall discontent with Zanu PF.Advertisement