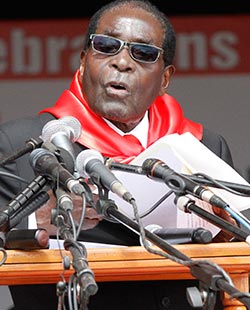 ZIMBABWEANS inhale and exhale politics, and at every gathering and at every opportunity any conversation always strays into politics and in some cases shouting matches. Zimbabweans of all political divides are passionate about their impact on national politics and that is refreshing and important.
However, what is disconcerting is how some Zimbabweans portray their own country in discussions with people from other nations. Zimbabweans, especially those in the diaspora incessantly whine about the country and present it with constant pessimism and negativity. Many do it and seem to derive some satisfaction from portraying their own country with catastrophism, doom and gloom.
Nobody is implying that things are perfect in Zimbabwe, but to have a grown man or woman huffing and puffing, frothing and fuming to paint Zimbabwe as the worst place on planet earth in some twisted quest to enlist the acceptance of circles from other countries is just substandard patriotism. There are people who have reached the summit of their forlorn existence with nothing else to look forward to, in particular in the diaspora, who devote the majority of their time demonizing and trash-talking Zimbabwe.
For some it is a preoccupation and they get a buzz from depicting Zimbabwe negatively and painting a picture of absolute ruination when telling people from other nations of how bad things are back home. Interestingly, you rarely hear people from Ghana, South Africa, Zambia, Kenya or many other nations tearing into their own countries at every opportunity they are given an audience and it is not as if things are all rosy in those countries. Those who denigrate their Zimbabwe confuse party politics with the country and national priorities.
Zimbabweans who publicly and persistently discredit their country clearly have no awareness of the social, political and economic implications of the negative speculation they constantly present to the world. Any negative statement and scaremongering about the country has far-reaching and damaging effects on the country as a whole. There are some of our own people with deep-rooted self-loathing traits, which often translate into national defamation which itself is self-vilification.
There is this extreme dislike or hatred of Zimbabwe triggered by what some perceive to be the shortcomings of the ruling party. It manifests itself in what appears to be a ‘culture cringe’, an embedded and internalized inferiority complex that causes our own people to have low national esteem, national worth and an acceptance that others and not their own are intrinsically more worthy. The problem many of these parti pris national naysayers is that they have no idea when to draw the line and separate country from party politics.Advertisement

Zimbabwe has both victors and victims of the trauma triggered by colonialism, segregation and the after-effects of imperialism. The same can be said of many if not all African countries. There are those who have managed to deal with the physical trauma and shackles of colonialism and there are those who have failed to do so. In Zimbabwe there are those who took up arms against the unyielding colonial establishment and dismantled the hurdles the system created. They physically and psychologically deconstructed the colonial construct and enabled all Zimbabweans to be counted as first class citizens in their own country.
However many among us have struggled with pulling down the veil and the psychological scars inflicted by the trauma of colonization and imperialism. These are the victims who still express sympathy and empathy with the Rhodesian system, have publicly expressed positive feelings towards the architects of the system to the point of defending it and identifying with it while putting down the system that liberated them. There are many Zimbabweans, especially in the diaspora who present such negative traits. Some victims have called for the ‘escalation of the economic crisis’ to further that very system which subjugated Zimbabwe and many other African countries.
It is defeatist and unpatriotic to consistently put your own country down. Every citizen has a duty to defend their own country, their own nationhood and their pride as a people instead of devoting energies to trampling on the name of Zimbabwe and its people. Why is it that other nationalities do not always air their dirty laundry in the public and never present their countries in a negative light? There are many countries worldwide that have it much worse than Zimbabwe but you rarely hear their nationals parading it to the world that their country is the definition of disaster. There is no denying that things could be better in Zimbabwe but perennially naysaying your own country is not going to make things any better.
Those who denounce Zimbabwe claim that President Robert Mugabe forced them out and that they did not have a choice in the matter and hence the bitterness. Choice is a very big word that should be used carefully for we all make our choices and we have to live with them. People have migrated and moved around the world since time immemorial and for anyone to blame President Mugabe for their nomadic ways is nothing short of comical and preposterous. People are all over the world for various reasons and Zimbabweans are no exception. Most people had a choice to either leave or stay. Some chose to leave and others chose to stay.
Nobody was chased away from Zimbabwe and that is fact and those who blame the President for their own wish to leave the country and try different things are being devious and dishonest. There are many Zimbabweans who decided not to leave the country and they are carrying on with their lives. Many chose to stay and are doing better things than the majority who diced with the diaspora. Nobody is saying that things are easy but life goes on in Zimbabwe. Whatever each individual’s circumstances are, the choice is often theirs to make unless of course if they are children.
It is easy to try and abdicate responsibilities for the consequences of the choices we make to try and blame it all on President Mugabe. In Zimbabwe there is there is land to farm, there are opportunities if you exert yourself, and most importantly there is peace. Most if not all of us have a choice to either stay in our peaceful land called Zimbabwe or move to other parts of the world to face the unknown.
bernardbwoni.blogspot.com