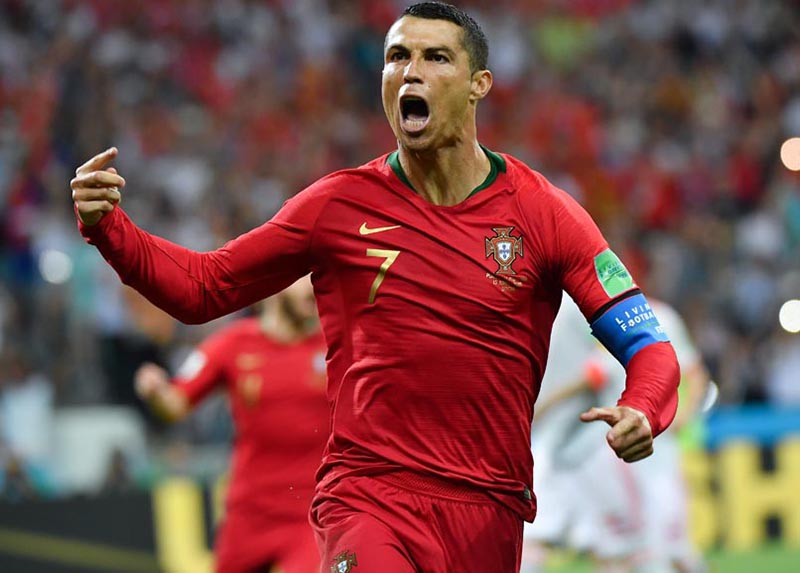 RUSSIA: Cristiano Ronaldo’s brilliant hat-trick for Portugal that lit up the World Cup on Friday capped one of the most extraordinary days in his remarkable career.

In the afternoon, news broke in Spain that the Portuguese superstar has agreed to pay a huge, multi-million euro fine to settle a tax fraud claim, before his goals secured a 3-3 draw against the Spanish in one of the most memorable World Cup games in recent memory.

It was Ronaldo’s last effort — a stunning, 88th-minute free-kick — that clinched a precious point for the European champions in their Group B opener against a Spain side whose line-up in Sochi featured three of his club colleagues at Real Madrid.

His long-running problems with the Spanish taxman relate to allegations that he used companies in low-tax foreign jurisdictions — notably the British Virgin Islands and Ireland — to avoid having to pay tax otherwise due.

Ronaldo has had the case hanging over him since he appeared in court last July near Madrid to answer four counts of tax evasion.

Yet it has not had any major impact on his on-field performances. In fact the effect seems to have been the opposite.

The 33-year-old came to Russia on the back of a storming finish to the club season with Madrid and he has now carried that on into the World Cup.

“He is getting better every year. People were waiting for him to get old and play worse, but he is only improving. I hope he manages to keep it up,” said his Portugal teammate Bernardo Silva.

Ronaldo has now scored in eight consecutive major tournaments, going back to Euro 2004.

His three goals on Friday — which included a fourth-minute penalty and a first-half effort that went in thanks to a mistake by Spain goalkeeper David de Gea — mean he has now scored at four World Cups.

The only others to have done that are Pele, Uwe Seeler and Miroslav Klose.

Despite his advancing age, there is no sign of him slowing down. He only scored one goal at each of the last three World Cups, but he doubled his finals tally in one humid night on Russia’s Black Sea coast.

Ronaldo is helped up by Sergio Ramos, on a night that saw the Real Madrid club colleagues come up against one another

“It really is fabulous to have a player like him. I am delighted that he is Portuguese. He led the way for us.”

According to Opta, Ronaldo’s hat-trick was the 51st of his career for club and country, as well as the 51st in the history of the World Cup.

It was a clear sign of intent from a player who is dreaming of adding a World Cup winners’ medal to that won at Euro 2016 and his many other honours, including four Champions Leagues in five years with Real.

Ronaldo made brief remarks to a FIFA press officer after the game but left before media could ask questions about his legal problems.

A legal source in Madrid said he had agreed to pay 18.8 million euros ($20 million) to settle the tax issue.

The agreement still has to be ratified and will likely come with a two-year jail term — although sentences of up to two years are not generally served in Spain.

But Ronaldo appears fully focused on matters on the field in Russia.

“The World Cup has only just begun. Portugal are hoping to get through the first round,” he said, with matches against Morocco and Iran to come next.

“We are not the favourites but we are contenders and we will do as well as we can.”