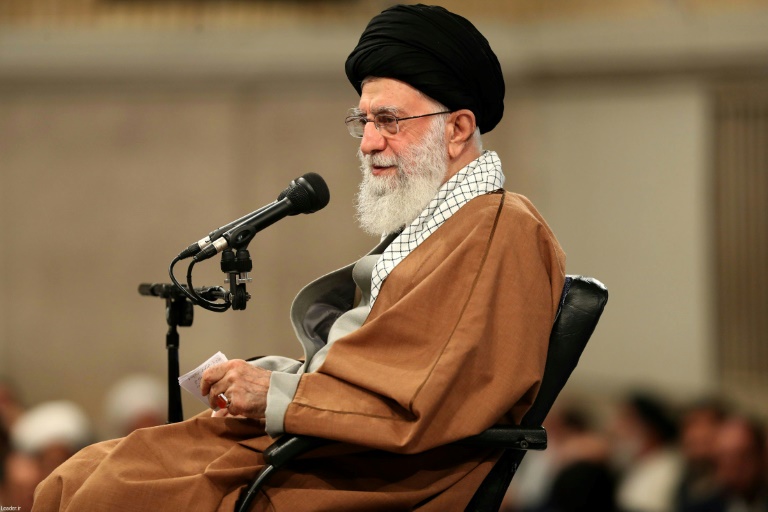 Iran's Supreme leader Ayatollah Ali Khamenei has vowed 'severe revenge' for the US strike that killed one of the country's top generals, fanning fears of a conflict in the crude-rich Middle East and sending oil prices surging
Spread This News

Oil prices soared more than four percent Friday following news that the US had killed a top Iranian general, fanning fresh fears of a conflict in the crude-rich region, with Tehran warning of retaliation.

The head of Iran’s Quds Force, Qasem Soleimani, was hit in an attack on Baghdad’s international airport early Friday, according to Hashed al-Shaabi, a powerful Iraqi paramilitary force linked to Tehran.

Later, Donald Trump tweeted a picture of the American flag, and the Pentagon said he had ordered Soleimani’s killing.

Iran’s supreme leader Ayatollah Ali Khamenei warned of “severe revenge” for “the criminals who bloodied their foul hands with his blood”, while the country’s foreign minister called the move a “dangerous escalation”.

Brent surged 4.4 percent to $69.16 and WTI jumped 4.3 percent to $63.84 as investors grow increasingly worried about the effects of a possible flare-up in the tinderbox Middle East on supplies of the commodity. Both oil contracts later pared the gains but remained well up.

“This is more than just bloodying Iran’s nose,” said AxiTrader’s Stephen Innes. “This is an aggressive show of force and an outright provocation that could trigger another Middle East war.”

The killing of Soleimani is a dramatic escalation of tensions between the United States and Iran and comes after a pro-Iran mob this week laid siege to the US embassy in Iraq following deadly American air strikes on the hardline Hashed faction.

The attack on the embassy highlighted new strains in the US-Iraqi relationship, which officials from both countries have described to AFP as the “coldest” in years.

Oil prices saw a record surge in September after attacks on two Saudi Arabian facilities briefly slashed output in the world’s top exporter by half, with Trump blaming Iran for the attack and previous other blasts on tankers in the Gulf last year.

– ‘A less safe world’ –
The crisis also comes as tensions between the US and North Korea worsen, with Kim Jong Un declaring a self-imposed moratorium on nuclear and intercontinental ballistic missile tests had ended, with US talks going nowhere.

“We are waking up to a less safe world than it was only hours ago, especially if we combine this with simmering tension in the Korean peninsula,” Innes added.

The drama sent investors rushing for the hills and safe-haven units rallied with the yen up 0.6 percent against the dollar and gold climbing 1.4 percent towards $1,600 and a near seven-year high.

High-risk currencies retreated against the greenback, with South Korea’s won down 0.8 percent, Australia’s dollar off 0.6 percent and the South African rand down 1.7 percent.

Equities were mixed, having been rallying for the second day of the year on China-US trade optimism.

But there were gains in Sydney, Seoul, Wellington, Manila and Taipei.

Regional energy firms were the big winners, with Santos surging more than two percent in Sydney and while Hong Kong-listed PetroChina climbed 2.8 percent.

Markets had all been well up before news of the strike, thanks to ongoing optimism fuelled by the China-US trade agreement, looser central bank monetary policies and easing Brexit worries.

“Investors are worried that the situation in Iran will worsen, since there could be some retaliation,” said Steven Leung at Mizuho Bank. “People will want to cut risk ahead of the weekend. Stocks have rallied a lot in the past month or so, so any bad news flow is a reason to take profit.”