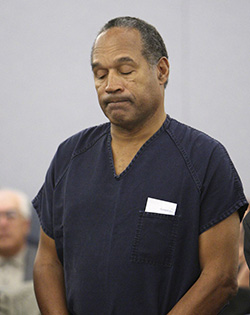 A LAWYER for O.J. Simpson said Friday they’ll decide their next step after the Nevada Supreme Court rejected the imprisoned former football star’s latest appeal of his 2008 kidnapping and armed robbery conviction.
Attorney Patricia Palm said she needed to talk with Simpson at Lovelock Correctional Centre about the Thursday ruling by a three-member panel of the state high court, and whether he wants to appeal to federal court.
The Nevada justices issued a detailed 16-page decision saying they found there was no reason to overturn Clark County District Court Judge Linda Marie Bell’s findings in the case and give Simpson a new trial.
The court said Simpson failed to show that his notoriety following his 1995 acquittal in Los Angeles in the deaths of his ex-wife, Nicole Brown Simpson, and her friend, Ronald Goldman tainted his trial in Las Vegas, and he failed to demonstrate that his lead trial lawyer, Yale Galanter, had a conflict of interest.
“We … conclude the district court did not err in denying these claims,” justices Ron Parraguire, Michael Douglas and Michael Cherry said.
Simpson lawyers filed the appeal in May 2014, arguing that Bell should have granted the former athlete a new trial on charges related to a botched hotel room heist. Simpson was sentenced to 9 to 33 years.
Palm and attorneys Ozzie Fumo and Tom Pitaro argued that Galanter mishandled the case in an effort to continue to represent Simpson at trial and in his initial appeal so he could reap attorney fees and fame.
The Supreme Court in September 2010 rejected a previous Simpson appeal filed by Galanter.
“Simpson has demonstrated only one error: Appellate counsel’s failure to provide a complete, accurate record on appeal,” the justices said Thursday.
Galanter denied he had conflicted interests and mishandled Simpson’s defence. On Friday, he called it gratifying to have the state high court review his work in the case.
Simpson, 68, is serving his sentence in a northern Nevada prison after a jury found him guilty of multiple felonies for leading five other men in a September 2007 confrontation with two sports memorabilia dealers at a Las Vegas hotel. Two of the men with Simpson testified they brought guns, at Simpson’s request.
Clark County District Attorney Steve Wolfson called the Simpson case closed.Advertisement

“It’s clear that the Nevada Supreme Court believed that Judge Bell conducted a thorough and exhaustive hearing exploring all the allegations brought by the defence,” he said.
Simpson didn’t testify at his robbery trial in Las Vegas. Galanter and co-counsel Gabriel Grasso claimed Simpson was just trying to retrieve items stolen from him more than a decade earlier, after his acquittal in the Los Angeles case.
Simpson’s appeal argued that his multiple convictions and sentences for assault with a deadly weapon and robbery with use of a deadly weapon constituted double-jeopardy; that Galanter should have challenged his multiple convictions and punishments; and that the jury should have been given a chance to consider lesser kidnapping and theft offences.
Bell held several days of hearings in May 2013 on Simpson’s claims. Simpson testified, insisting that he never knew any of the men with him were carrying guns.
Bell ruled in November 2013 that any errors at trial wouldn’t have changed the outcome of Simpson’s trial and agreed with prosecutors that there was no need for another trial.
The judge said she reviewed the court record and determined there was overwhelming evidence that Simpson orchestrated the armed kidnapping and robbery.
Four men who were with Simpson pleaded guilty before trial to felonies and served probation.
Co-defendant Clarence “C.J.” Stewart stood trial with Simpson and was convicted.
Stewart was sentenced to 7½ to 27 years, but his conviction was overturned by the Supreme Court as tainted by Simpson’s fame.
Stewart avoided retrial, pleaded guilty to felony robbery and conspiracy and was freed from prison after serving more than two years.