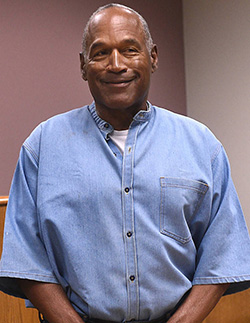 WHEN O.J. Simpson gets out of prison in October for his first taste of freedom in nine years, he will have the mementos he was convicted of stealing in a Las Vegas heist, his guaranteed NFL pension and, with any luck, certain life skills he says he acquired behind bars.
Beyond that, the 70-year-old sports legend faces an uncertain future.
“The legitimate mainstream business opportunities for Juice in the megabuck world of professional sports are slim and none,” said John Vrooman, an economics professor and sports industry expert at Vanderbilt University.
“If Americans love anyone more than a superhero, it is a fallen hero making a comeback against the odds,” he said a day after Simpson was granted parole. But Vrooman said the odds against the one-time murder defendant and convicted armed robber “now seem insurmountable.”
Others think he will find a way to make ends meet, perhaps by signing autographs and making personal appearances.
“The primary asset this guy has is name and brand recognition. … I believe Mr. Simpson believes he can make a bunch of money by returning to the memorabilia circuit,” said David Cook, collections attorney for the parents of Ronald Goldman.
Goldman was stabbed to death along with Simpson’s ex-wife Nicole Brown Simpson in Los Angeles in 1994, a crime O.J. Simpson was acquitted of the following year.
He was found liable in civil court in 1997 for the killings and was ordered to pay $33.5 million to the victims’ families. The verdict is still hanging over him, and the Goldmans’ lawyer has been trying for years to seize some of Simpson’s assets.
After getting released, Simpson plans to move to Florida, a state with a strong law that would shield his home and everything in it from seizure to satisfy the verdict. But Tom Scotto, one of Simpson’s closest friends, said Simpson has no plans to buy a house.
Simpson played 11 seasons for the Buffalo Bills and San Francisco 49ers, and his league pension could be as much as $10,565 a month, depending on when he began collecting it, according to ESPN.
Cook said he believes Simpson does not have much more than that, noting that the Hall of Famer lost his Miami-area home to foreclosure in 2014.Advertisement

One thing Simpson will have is some of the sports memorabilia and family photos he and his armed accomplices stole from a Las Vegas hotel room in 2007, the crime for which he was locked up.
He told the parole board on Thursday that California authorities investigated the ownership of the items shortly after he went to prison, concluded they were his and returned them to him, a turn of events he called “kind of mind-boggling.”
Simpson also told the board he is a better man and a “better Christian” and has a new appreciation for those less advantaged. He said he intends to make use of what he considered the most valuable part of his stint in prison – an “Alternative to Violence” class.
Others wondered if he had really changed, given how defensive much of his testimony was and how lacking in self-awareness he seemed to many of those watching. He tried to explain away the crime and deflect blame, and he set social media afire when he said, “I’ve basically spent a conflict-free life, you know.”
If he gets in trouble again in the next five years, he could be sent back to prison to serve out the remainder of his 33-year sentence.
Scotto, for one, said Simpson is not going to go on the personal appearance circuit and instead plans to spend his time golfing and being with family and friends.
Andrew Zimbalist, an economics professor at Smith College who has written books on sports, warned that if Simpson tries to profit from his notoriety through signings and appearances, “he’ll be subject to a very difficult life. There are a lot of people out there who are convinced he is a very nasty man.”
Instead, Zimbalist said, “he could live a wholesome and productive life by working with children, giving motivational talks that talked about this struggle in life and how he has reformed himself.”