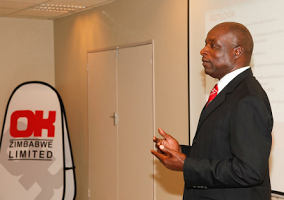 OK ZIMBABWE recorded a negative performance over the period to September 2014 with sales declining 4,8 percent from the US$244 million recorded in the same period last year.
Group CEO Willard Zireva told analysts that their customer count had also dropped by one percent.
“Customers are struggling and in my view almost every business is going to see a reduction in revenue. Unless and until government focuses on getting the economy to work, business is going to continue going down,” he said.
The liquidity situation, he said, remains and will continue to be tight. As a consequence, demand has been constrained right across the market.
Like most local businesses, OK Zimbabwe is starting to experience the effects of the decline in economic activity characterized by continued liquidity challenges, company closures, high unemployment and hence depressed customer demand.
Performance in the retail sector is a good measure for the level of economic activity in a country as consumer expenditure makes up approximately two-thirds of total gross domestic product.
Retail turnover is considered a coincident indicator, with changes thereof reflecting the current state of the economy.
OK Zimbabwe’s earnings before tax eased by 10.8 percent from US$6.5 million in 2013 to US$5.8 million.
Profit after tax came in 10.9 percent lower, at US$4.3 million, compared to US$4.8 million in the comparable period.
Earnings per share came down 14 percent to 0.37 cents, against 0.43 cents in HY2013. During the period under review, operating expenses went up by 4.5 percent to US$36.3 million mainly driven by higher net operating expenses and employee costs.
Employment costs made up 44.2% of total overheads during the period under review.
These have historically contributed an average of 42 percent to total overheads, whilst utilities, shrinkage, marketing and security expenses on average made up more than 50 percent of net operating expenses.
With an average net profit margin of two percent in the last five financial periods and despite a decline in the rate of growth in expenses, OK Zimbabwe’s biggest challenge remains reducing procurement costs in order to widen the operating profit margins.
The company’s net income margin dropped to 1.9 percent from 2 percent in the comparable period. With the top line shrinking, any stability or growth in earnings will come through cost cutting measures.Advertisement