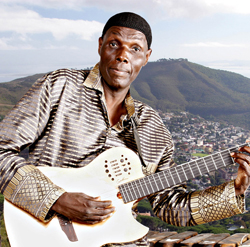 LEGEND Oliver Mtukudzi is set to perform in Australia at the end of this month.
For his tour down under with a six-piece line-up, Mtukudzi has dispensed with the traditional mbira and marimba in favour of guitars, keyboards and percussion.
Forming part of his repertoire will be hits such as Todii, Huroi, Haidyoreke and Hear Me Lord, along with selections from the album Sarawoga, which was inspired by the death of his son, and latest release, Mukombe Wemvura.
“I don’t write set-lists,” he says. “I just look for the first song and then everything falls into place.”
The show is scheduled for November 28.
Since the late 1970s, the 63-year-old cultural icon has released more than five dozen albums — one for every year of his life.
Reflecting on his long career Tuku told Australian media: “Above all, I thank God for giving me time to have such a long history.”
Described by Time Magazine as “the voice of the voiceless”, Tuku’s music reflects the life and struggles of ordinary people, championing solidarity, hope and healing.
In 2011, he was appointed the UNICEF Goodwill Ambassador for Eastern and Southern Africa.Advertisement