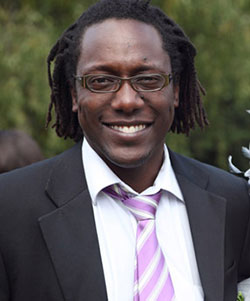 A FORMER Zimbabwean cricketer, Henry Olonga, who now makes his living as a tenor and after dinner speaker in the United Kingdom.
Olonga was the first black man to play cricket for Zimbabwe, but the fast bowler had to flee the country in 2003 after he made a political stand against the government by wearing a black armband with team mate Andy Flower at a World Cup match.
He now lives in England with his wife and two small children, and has a new career as a singer and after dinner speaker.
Olonga will make a guest appearance at Aliquando’s spring concert at the Christ Church Centre on Saturday, May 17 when he will talk about the fascinating events of his life, and also join the choir in singing an oratorio of African music, Zimbe, Come Sing the Songs of Africa.
Aliquando’s musical director, Anne Evans, organised the concert in order to raise funds for the Jacaranda Trust, a Henley-based charity which provides aid for projects in Zimbabwe.
Anne, who was born in Zimbabwe and lived there until she was eight, said she had come up with the idea after talking to the chairman of trustees, Toby Greenwood.
She said: “We usually do things for local charities but because I felt so strongly about this project I decided to persuade the choir to support it. It’s a fascinating project.
“Probably because I was born in Zimbabwe, I can empathise with the fate of Zimbabweans who are having a tough time of it at present.”
Money raised will help fund a special project to introduce the manufacture and distribution of the Jaipur Foot, a specially-designed prosthetic limb which is easy to assemble and fit, for disabled people.
Aliquando, which was set up in 2009, is a 30-strong, ladies-only chamber choir which performs twice a year for a chosen charity. Anne said: “We are trying to bring music not generally sung by big choirs,” she said. “It’s nice for the audience to have a change of music.”Advertisement